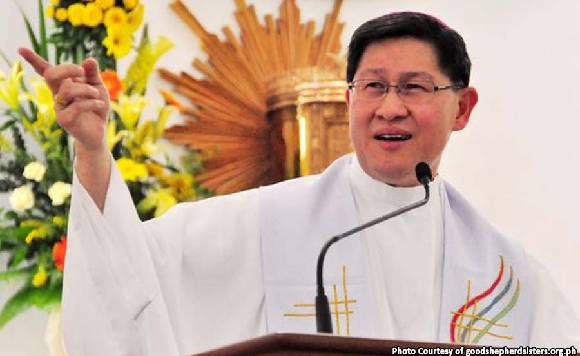 Malacañang on Monday congratulated Luis Antonio Cardinal Tagle for being promoted to the rank of Cardinal-Bishop, the highest title within the College of Cardinals.

Presidential Spokesperson Harry Roque made this statement after the Vatican press announced Tagle’s promotion on Friday (May 1).

With his promotion, Tagle now joins the ranks of 13 other Cardinal Bishops — 10 from the Latin Church and three Cardinal patriarchs from the Oriental rites.

Cardinal-Bishops hold jurisdiction over a church in a suburb of Rome while working in departments of the Roman Curia, the central administration of the church.

Cardinal-Deacons, often called “the Pope’s Cabinet”, also work full time in the curia, while Cardinal-Priests work in dioceses all over the world.

It is also from the ranks of Cardinal-Bishops that the Dean of College of Cardinals is elected to preside at the conclave in the case of “sede vacante”, a period when there is no pope.

There are customarily six Cardinal-Bishops from the Latin Church until Pope Francis broke the tradition and appointed more of them.

Last December, the Pope appointed Tagle the Prefect of the Congregation for the Evangelization of Peoples, a major Vatican post.

Tagle is the second Asian to hold the post, the other being Cardinal Ivan Dias of India who served from 2006 to 2011.

Tagle left his position as Archbishop of Manila in February this year to take up his new post in Rome. (PNA)