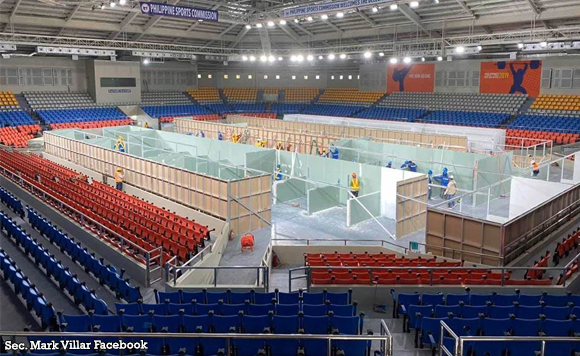 The government is looking at more venues in Metro Manila to be converted to facilities for coronavirus disease 2019 (Covid-19) patients, Department of Public Works and Highways (DPWH) Secretary Mark Villar said Friday.

Villar said this is aside from the Rizal Memorial Coliseum particularly the Ninoy Aquino Stadium in Manila, the Philippine International Convention Center (PICC) Forum Halls and the World Trade Center (WTC), both located in Pasay City are set to be finished next week.

“Bukod sa Rizal Memorial, WTC, PICC, we are also looking for other areas among them are the Philippine Institute of Sports Multi-Purpose Arena or Philsports Arena (formerly Ultra) in Pasig City, Veterans Memorial Hospital in Quezon City,” he said in a phone interview during the Laging Handa briefing over state-run PTV.

He added that the three facilities can accommodate 936 patients.

“First facility (to be completed) within the week is the (Ninoy Aquino Stadium inside the Rizal Memorial). Our timeline is to finish all three facilities within 10 days. We also thank the private sector. For the Rizal Complex, it’s Razon group. For WTC, it’s Ayala group. For PICC, it’s EEI and Vista Land group. They are all helping to immediately finish these facilities,” he said.

The Ninoy Aquino Stadium inside the Rizal Memorial Complex will be operational as early as next week, while both the PICC and the World Trade Center in Pasay City will be finished on April 11.

The quarantine facilities will have airconditioned cubicles, free food for patients and the front-liners, free access to internet connection, and 24/7 monitoring by doctors and nurses.

University of the Philippines-Philippine General Hospital Architect Dan Lichauco said each facility was s designed to ensure protection of the staff and health workers, and follow the protocols of the Department of Health (DOH).

“We made sure that there are outlets in their cubicles so that they can plug-in their devices, we also have nourishment stations, water stations, so that they can basically get what they need while they are quarantined there,” he said.

“In everything we do, we made sure (that there will be no mass infection) and we’re protecting the nurses and the staff as they move in and out of the facility,” Lichauco added.

Other facilities in the National Capital Region that will be converted into instant hospitals include Quezon City Circle, Amoranto Stadium, Quezon Institute, Duty Free, FTI station in Taguig City and the Filinvest Tent in Alabang.

Construction of facilities in Central Luzon are also underway at the Philippine Arena in Bulacan, the ASEAN Convention Center in Clark, Pampanga, and the New Clark City Government Center in Capas, Tarlac.

The New Clark City Athletes’ Village will also be used as a quarantine site.