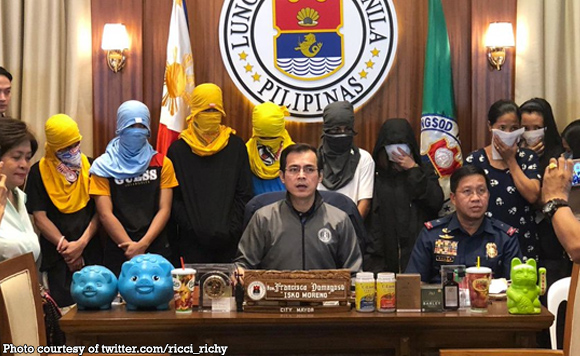 0 755
Share
Want more POLITIKO News? Get the latest newsfeed here. We publish dozens and dozens of politics-only news stories every hour. Click here to get to know more about your politiko - from trivial to crucial. it's our commitment to tell their stories. We follow your favorite POLITIKO like they are rockstars. If you are the politiko, always remember, your side is always our story. Read more. Find out more. Get the latest news here before it spreads on social media. Follow and bookmark this link. https://goo.gl/SvY8Kr

This may be the reason for Isko Moreno’s frequent live broadcasts from the city hall.

The Manila mayor again took the spotlight when he presented a group of boys who were caught on camera setting fire to a poor vendor’s stash of balloons for Valentine’s Day. The man suffered burns, so the politiko ordered authorities to round up the suspects.

He did present the boys to the media, who had their faces hidden behind t-shirts. Netizens, however, noticed something different.

True enough, there were cups of Fruitas shakes, Barley supplements, and what looked like hair products.

The politiko had earlier been called out for accepting endorsement deals, with a lawyer saying it violated the law. Moreno, however, said he’s been donating the talent fees he would receive to charity.

Another pointed out that Moreno doubled as an online video blogger.