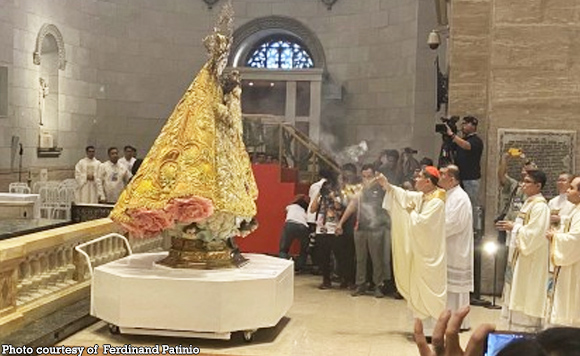 0 2,596
Share
Want more POLITIKO News? Get the latest newsfeed here. We publish dozens and dozens of politics-only news stories every hour. Click here to get to know more about your politiko - from trivial to crucial. it's our commitment to tell their stories. We follow your favorite POLITIKO like they are rockstars. If you are the politiko, always remember, your side is always our story. Read more. Find out more. Get the latest news here before it spreads on social media. Follow and bookmark this link. https://goo.gl/SvY8Kr

After 67 years, the original image of the Our Lady of La Naval returned to its first home in Intramuros, Manila on Friday.

The homecoming, which was highlighted by a procession around the historic walled city, was attended by devotees and members of the Colegio de San Juan de Letran community as the college celebrates its 400th year.

Before the procession, Manila Archbishop Luis Antonio Cardinal Tagle held a Mass at the Manila Cathedral.

In his homily, Tagle urged the Dominican-run group to devote the year “to prayerful discernment.”

“May you be a community of prayer, patterned after the heart and the spirit of the prayer of Mary,” he said.

Tagle also led the commemoration of the 1907 canonical coronation of the image of Mother Mary holding the Infant Jesus Christ, now considered the oldest ivory carving in the Philippines.

In 1593, a Chinese merchant was commissioned to carve the image of the Virgin Mary under the title of Our Lady of the Rosary.

The statue was entrusted to the Dominican friars for public veneration at the Santo Domingo Church, which was then located in Intramuros.

After the church was destroyed during World War II, the image was temporarily housed at the University of Santo Tomas.
The image measures approximately four feet and eight inches tall. Its body is made of hardwood but its face and hands, as well as the entire Child Jesus, are made of solid ivory.

It was re-enshrined at the new Santo Domingo Church in Quezon City in 1954.

In 1973, La Naval was formally declared the patroness of the city, which was at that time the country’s capital.

An annual procession is held every second Sunday of October during the Feast of La Naval.

The shrine was declared a National Cultural Treasure by the National Museum of the Philippines in 2012.