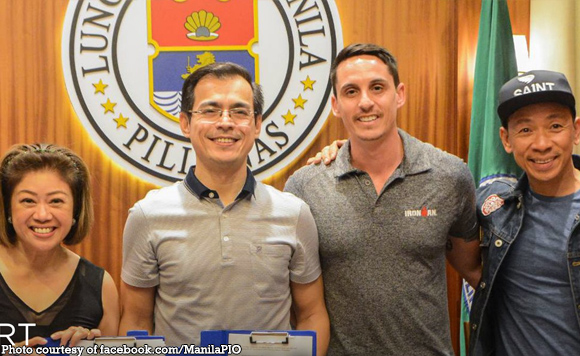 0 295
Share
Want more POLITIKO News? Get the latest newsfeed here. We publish dozens and dozens of politics-only news stories every hour. Click here to get to know more about your politiko - from trivial to crucial. it's our commitment to tell their stories. We follow your favorite POLITIKO like they are rockstars. If you are the politiko, always remember, your side is always our story. Read more. Find out more. Get the latest news here before it spreads on social media. Follow and bookmark this link. https://goo.gl/SvY8Kr

The city government of Manila has partnered with an events company to stage the first ever Rock n’ Roll marathon in Asia.

Mayor Isko Moreno said the marathon will show Manila’s brighter side and charm.

“Manila is full of heritage sites. It is one of the oldest cities of the world,” he said.

“We wanted to bring the Rock ‘n’ Roll Marathon to the City of Manila so that we can showcase its cleanliness, kasabay yung pagpromote ng mga heritage buildings,” Galura said, noting that the music set to be played will have a “Filipino touch.”

While the marathon’s date hasn’t been announced yet, organizers said its route will feature heritage sites of Manila.

The marathon will be open to everyone: including members of the LGBTQ community, persons with disabilities, and senior citizens.