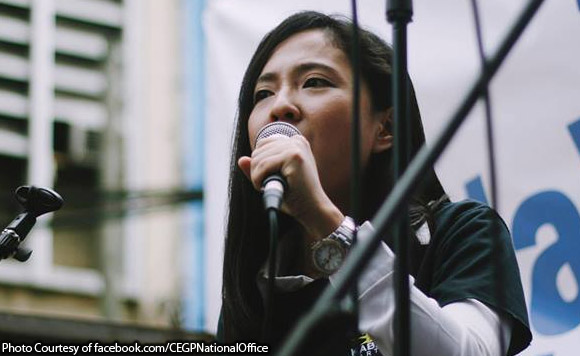 0 889
Share
Want more POLITIKO News? Get the latest newsfeed here. We publish dozens and dozens of politics-only news stories every hour. Click here to get to know more about your politiko - from trivial to crucial. it's our commitment to tell their stories. We follow your favorite POLITIKO like they are rockstars. If you are the politiko, always remember, your side is always our story. Read more. Find out more. Get the latest news here before it spreads on social media. Follow and bookmark this link. https://goo.gl/SvY8Kr

Kabataan party-list Rep. Sarah Elago on Monday called for the immediate imposition of a national moratorium on tuition and other fee increases on all educational institutions amid recent calamities, including typhoons Tisoy and Ursula, earthquakes in Mindanao, and the eruption of Taal volcano.

“Apart from our efforts and calls to provide immediate relief and fast release of aid to all affected communities, a tuition moratorium is necessary to give the people, especially the parents and students, a much-needed respite as they rebuild their homes and their lives while ensuring learning continuity,” she said.

The Makabayan lawmaker said the onslaught of typhoons and earthquakes in the second half of 2019 alone left billions of damages in schools, hospitals, homes, with thousands of evacuees and displaced students, teachers and workers.

In 2020, classes in Tisoy and Ursula-hit areas resume in tents or other temporary learning spaces. ‘Double shifting’ of classes is also being implemented to accommodate the high number of students, she notd.

Since the eruption of Taal, the Department of Education reported that about 2.4 million students affected with 1,055 personnel and 30,814 learners in 78 public schools located in the 14-km radius danger zone of the volcano, and about 1,600 classrooms in 141 nearby public schools which are accommodating more than 58,000 people.

“Congressional support for learning continuity, and strengthened oversight on calamity and quick response funds (QRFs) are imperative as they are matters of urgency and necessity,” Elago said.