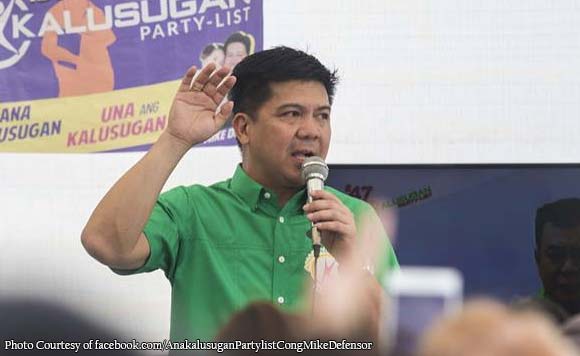 0 243
Share
Want more POLITIKO News? Get the latest newsfeed here. We publish dozens and dozens of politics-only news stories every hour. Click here to get to know more about your politiko - from trivial to crucial. it's our commitment to tell their stories. We follow your favorite POLITIKO like they are rockstars. If you are the politiko, always remember, your side is always our story. Read more. Find out more. Get the latest news here before it spreads on social media. Follow and bookmark this link. https://goo.gl/SvY8Kr

“State universities can decide on their own to allow the use of their open spaces as transient evacuation centers – if necessary and where feasible – while government is finding ways to establish more suitable settlements for dislocated residents,” he said.

“They are autonomous administrative entities. They need not wait for any directive from the Office of the President or the Commission on Higher Education in order to act,” Defensor pointed out

Defensor was responding to a Department of Education (DepEd) report that over 200 public elementary and high schools in Batangas and Cavite are now being used as evacuation centers, causing the stoppage of classes of students.

“Our sense is, state universities might be in better position to accommodate provisional shelters, simply because they have more land, structures and facilities available across multiple locations compared to public elementary and high schools,” he said.

“This way, we can normalize classes in affected public elementary and high schools, without disrupting those in state universities that might find ways to help,” Defensor said.

All residents within Taal’s 14-kilometer danger zone have been ordered to flee their homes and move to evacuation centers.