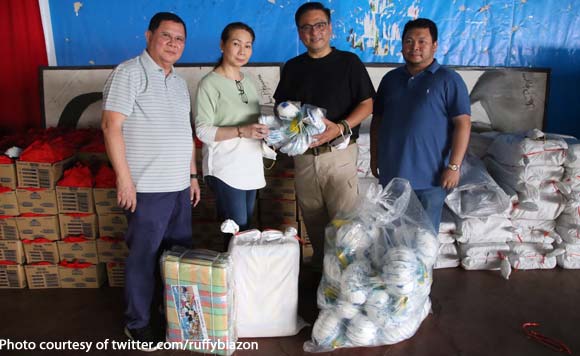 0 869
Share
Want more POLITIKO News? Get the latest newsfeed here. We publish dozens and dozens of politics-only news stories every hour. Click here to get to know more about your politiko - from trivial to crucial. it's our commitment to tell their stories. We follow your favorite POLITIKO like they are rockstars. If you are the politiko, always remember, your side is always our story. Read more. Find out more. Get the latest news here before it spreads on social media. Follow and bookmark this link. https://goo.gl/SvY8Kr

A team from Biazon’s office recently delivered to Batangas 1,000 food packs, 1,000 sleeping mats and 1,500 N95 masks for the evacuees. The masks will filter out the ash fall from Taal Volcano’s enhanced volcanic activity.

In a January 16 tweet, Biazon said the items were turned over to Batangas Rep. Ma. Theresa Collantes, whose district were among those where mandatory evacuation has been enforced.

More than 70,000 people have been displaced due to Taal Volcano’s restiveness since January 12.

Today, a team from my district office delivered our aid for the relief efforts for victims of Taal volcano eruption. We turned over 1,000 food packs, 1,000 sleeping mats and 1,500 N95 masks to Rep. Maitet Collantes whose district covers the towns around Taal lake. pic.twitter.com/kciEDj11cD