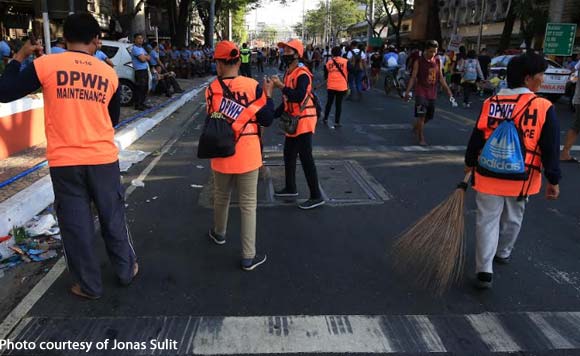 0 1,239
Share
Want more POLITIKO News? Get the latest newsfeed here. We publish dozens and dozens of politics-only news stories every hour. Click here to get to know more about your politiko - from trivial to crucial. it's our commitment to tell their stories. We follow your favorite POLITIKO like they are rockstars. If you are the politiko, always remember, your side is always our story. Read more. Find out more. Get the latest news here before it spreads on social media. Follow and bookmark this link. https://goo.gl/SvY8Kr

The Metropolitan Manila Development Authority (MMDA) on Friday collected a total of 68 truckloads of garbage from this year’s Traslacion, a third less than last year’s collection.

In a message to reporters, MMDA spokesperson, Assistant Secretary Celine Pialago said the garbage, which weighed 330 tons, was collected from the start of the pahalik at the Quirino Grandstand on Monday until the procession of the Black Nazarene on Thursday.

This, compared to 100 truckloads of trash collected during last year’s Traslacion for the same period.

Aside from having the least amount of garbage collected, this year’s Traslacion was also the fastest, taking 16 hours and 30 minutes to complete compared to the average 21 hours in the previous years—breaking the record of 18 hours in 2013.

With the procession ending at around 9 p.m. on Thursday, Pialago said all roads and bridges in its route were cleared and passable at the same time as the procession’s end at the Quiapo Church.

However, the changes in the yearly religious event were not without its drawbacks as some devotees complained of being unable to reach the andas (carriage) that carried the statue of the Black Nazarene, due to stricter security by both the police and military personnel. (PNA)