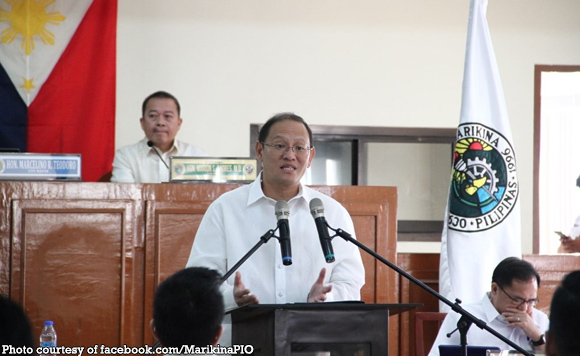 0 1,519
Share
Want more POLITIKO News? Get the latest newsfeed here. We publish dozens and dozens of politics-only news stories every hour. Click here to get to know more about your politiko - from trivial to crucial. it's our commitment to tell their stories. We follow your favorite POLITIKO like they are rockstars. If you are the politiko, always remember, your side is always our story. Read more. Find out more. Get the latest news here before it spreads on social media. Follow and bookmark this link. https://goo.gl/SvY8Kr

Marikina City Mayor Marcy Teodoro chose to pour his efforts in crafting a memorable speech on his administration’s achievements instead of spending on lavish preparations for his 2020 State of the City Address (SOCA).

Teodoro’s SOCA was a simple and low key affair held Wednesday at the city hall during the 9th City Council’s first regular session.

The mayor wore a plan white polo barong while the councilors donned something similar or a more formal Filipiniana wear.

In his speech, Teodoro highlighted the recognition received by Marikina from the Department of Interior an Local Government (DILG) as one of the top local government units (LGUs) in Metro Manila when it comes to cleanliness and orderliness.

He also reported that the city government exceeded its target revenue collection for 2019, which is a sign of investor confidence.

For 2020, Teodoro vowed to implement Marikina’s own Comprehensive Land Use Program, and improve projects on cleanliness, public safety, health and education, among other areas.