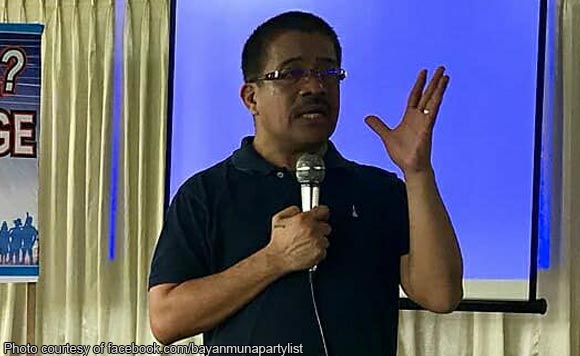 0
36
Want more POLITIKO News? Get the latest newsfeed here. We publish dozens and dozens of politics-only news stories every hour. Click here to get to know more about your politiko - from trivial to crucial. it's our commitment to tell their stories. We follow your favorite POLITIKO like they are rockstars. If you are the politiko, always remember, your side is always our story. Read more. Find out more. Get the latest news here before it spreads on social media. Follow and bookmark this link. https://goo.gl/SvY8Kr

Bayan Muna party-list Rep. Carlos Zarate on Friday said the “onerous and disadvantageous provisions of the Kaliwa dam China loan agreement are very apparent on its face that cannot simply be ignored by Malacañang.”

“Presidential spokesperson Sec. Salvador Panelo should have done some research on these onerous provisions of the China-funded Kaliwa dam project , especially after we exposed it early last year which also then prompted the Department of Finance (DOF) to make public the terms of the deal,” he said.

“At any rate here are some of the onerous provisions of the Kaliwa dam deal,” he said:

On Article 5.7, it is agreed upon that the Philippines or any of its assets, unless prohibited by the laws and public policies, are not entitled to any right of immunity on the grounds of sovereign or any legal process;

On Article 8.1, the Philippines irrevocably waived any immunity on grounds of sovereignty;

On Article 8.4, it stated that the agreement shall be governed by and construed in accordance with the laws of China;

On Article 8.5, it is agreed upon that Hong Kong International Arbitration Centre will conduct the arbitration in case of dispute;

On Article 8.9, it is stated that the terms, conditions and the standard of fees of loan agreement will be confidential.

The loan agreement was only later on released to the public by the Department of Finance due to the public outcry for transparency and accountability, said Zarate.

Recall that on May 9, 2019, Bayan Muna along with other progressive party-list groups filed a petition before the Supreme Court questioning the constitutionality of the loan agreement between China and Philippines for the construction of Kaliwa dam.

“We, along with other organizations, coalition and advocates, like the STOP Kaliwa dam coalition, questioned the above onerous provisions of the loan agreement. It would be well if Sec. Panelo can also read the petition,” he added.

The Davao-based solon further said that “solving the supposed water crisis in Metro Manila can be done without building a large dam near a fault line that will dislocate thousands of indigenous peoples, destroy the environment and further bury the country in debt.”

“For starters, Manila Water and Maynilad should drastically reduce their water systems loss because billions of gallons of water is wasted daily from leakages in the existing distribution infrastructure of Maynilad and Manila Water,” he said.

He added that by MWSS’s own account, Manila Water’s ‘non-revenue water'(NRW) loss is at 11% while that of Maynilad is at 39%.

“This is around 176 million liters per day (MLD) for Manila Water and about 1,001 MLD for Maynilad. That’s already 1,177 MLD lost,” he said, citing a study by the consumer group Water for the People Network (WPN).

“On its website, Maynilad claims an NRW of 27.1 percent in 2018 while Manila Water claims an NRW of 12 percent. Using these figures, the total volume of water losses from both concessionaires is still huge at 888 MLD,” he said.