Defensor: Despite pay increase, PH still can’t compete with US in attracting nurses 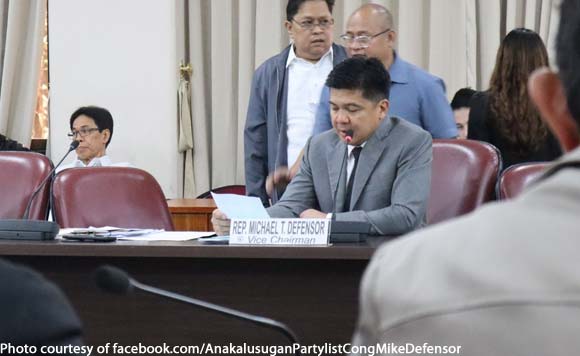 0 722
Share
Want more POLITIKO News? Get the latest newsfeed here. We publish dozens and dozens of politics-only news stories every hour. Click here to get to know more about your politiko - from trivial to crucial. it's our commitment to tell their stories. We follow your favorite POLITIKO like they are rockstars. If you are the politiko, always remember, your side is always our story. Read more. Find out more. Get the latest news here before it spreads on social media. Follow and bookmark this link. https://goo.gl/SvY8Kr

Despite the pay increase under the fifth Salary Standardization Law (SSL V), Anakalusugan party-list Rep. Mike Defensor on Sunday acknowledged that several Filipino nurses are likely to continue to move to the United States in particular.

“We simply can’t compete with the vastly superior working and living standards being offered by America to foreign nurses,” Defensor said.

Government nurses will be getting another 20 percent increase in their base monthly pay – from P30,531 to P36,619 – over the next four years, the lawmaker said.

“The starting pay of government nurses will be improved further by P6,088 – to be gradually given in four annual installments starting January 1, 2020 up to January 1, 2023 – under the salary standardization bill for civil servants already approved by both houses of Congress,” Defensor said

President Rodrigo Duterte earlier certified the bill as urgent, and is expected to sign it into law shortly, according to Defensor, House health committee vice chairperson.

The high court upheld in October the validity of a provision in the Philippine Nursing Act of 2002 that assigned Salary Grade (SG) 15 as the minimum pay allocation of government nurses.

The pay rates for the same grade will steadily go up to P36,619 for Step 1 and P39,367 for Step 8 under the new salary standardization scheme, Defensor said.

“We are counting on the 76 percent (or P15,865) increase in the base pay – from P20,754 to P36,619 – to help reduce the migration of Filipino nurses, and to encourage new nursing graduates to practice their profession,” Defensor said.

A number of nursing graduates have been opting out of their profession due to low pay, Defensor pointed out.

“A starting monthly pay of P36,619 is not that bad, considering that government will also be paying a mid-year bonus equal to a month’s salary, on top of the 13th month pay and P5,000 yearend cash gift, among other standard incentives and allowances,” he said.