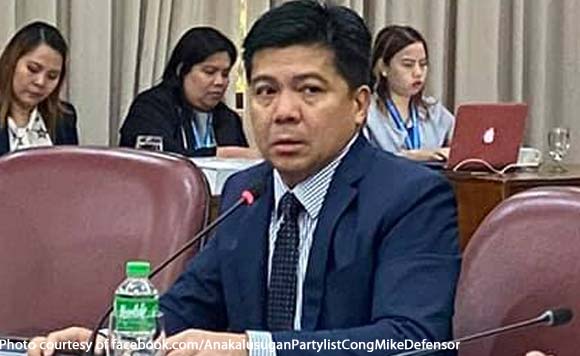 0 908
Share
Want more POLITIKO News? Get the latest newsfeed here. We publish dozens and dozens of politics-only news stories every hour. Click here to get to know more about your politiko - from trivial to crucial. it's our commitment to tell their stories. We follow your favorite POLITIKO like they are rockstars. If you are the politiko, always remember, your side is always our story. Read more. Find out more. Get the latest news here before it spreads on social media. Follow and bookmark this link. https://goo.gl/SvY8Kr

The resurgence of polio has underlined the importance of achieving zero open defecation (ZOD), but Anakalusugan party-list Rep. Mike Defensor is wary of tapping the Department of Health (DOH) to build more public toilets, due to previous anomalies in the construction of health stations.

“Our 41,913 barangay governments are in the best position to put up the public toilets, as needed, because they are more familiar with local conditions,” he said Sunday.

A large number of Filipinos without ready access to a toilet still choose to defecate in open fields, bushes, ditches, canals or exposed spaces.

In Metro Manila alone, an estimated 3.5 million residents, or 25 percent of the population, still do not have access to a household toilet.

Coupled with vaccination, ZOD is regarded as one of the best preventive measures against the polio virus, a fatal and disabling disease transmitted via the fecal-oral route.

“The problem with a centralized approach in constructing public toilets is that the DOH will just bid the project out to a private contractor that might bungle the job,” Defensor, also House health committee vice chairperson, said.

The private contractor abandoned the project after getting the initial payment of P1.2 billion and completing only 270 of the stations.

“The program was obstructed by ineligible and nonworkable project sites,” the Commission on Audit said in a 2017 performance report.

Despite the project’s failure, the contractor sent a termination billing to the DOH worth P2.9 billion, prompting Duque to call for an investigation by the Office of the Ombudsman.

“Greater transparency and accountability is also better assured, once the barangay governments themselves put up the public toilets,” Defensor said.

“Local residents will be able to see right away if the sanitation facilities were actually built or not, and whether these are being maintained properly,” Defensor pointed out.

On top of whatever funds they generate on their own, barangay governments have their Internal Revenue Allotment (IRA), some of which may be used to put up the communal toilets in their areas, Defensor said.