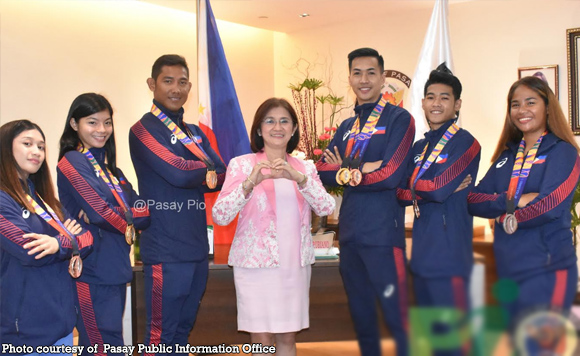 0 549
Share
Want more POLITIKO News? Get the latest newsfeed here. We publish dozens and dozens of politics-only news stories every hour. Click here to get to know more about your politiko - from trivial to crucial. it's our commitment to tell their stories. We follow your favorite POLITIKO like they are rockstars. If you are the politiko, always remember, your side is always our story. Read more. Find out more. Get the latest news here before it spreads on social media. Follow and bookmark this link. https://goo.gl/SvY8Kr

Three of the athletes received P100,000 each during the flag raising ceremony. One silver medalist got P75,000; and two bronze medalists received P50,000 each. These incentives will come from the city hall, through a City Council ordinance.

“These athletes – Pasayeno athletes – brought great honor to our country and especially to our beloved city, Pasay City,” Calixto-Rubiano said.

The City Hall cash incentive will be on top of the cash premium that the Philippine Olympic Committee (POC) has promised to all medalists. Besides this, the athletes will also receive incentives from the Philippine Sports Commission (PSC).

Under Republic Act 10699 signed into law in 2015 and which was authored by then Congresswoman Calixto-Rubiano, athletes competing in SEA Games will get P300,000 incentive for gold medal, P150,000 for silver, and P60,000 for bronze.

The mayor also gave each of the medalists from Pasay a certificate of recognition for their outstanding performance in the SEA Games.