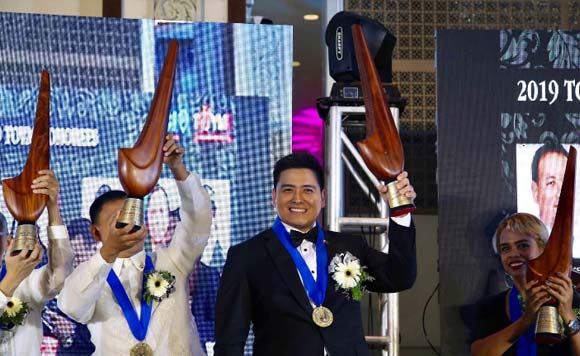 Quezon City Representative Alfred Vargas has been chosen as this year’s The Outstanding Young Men (TOYM) honoree for Public Service.

“I never expected that one day I would stand here today as an honoree and counted alongside my idols and the movers and shakers of our nation,” Vargas said as he accepted his award Friday night.

Vargas was recognized by TOYM for his efforts in providing affordable house and lot to several communities in Quezon City.

The Palupa program of Vargas was successful in providing several ISFs with their own house and lot within Quezon City.

Vargas was also recognized for being the principal advocate of the National Integrated Cancer Control Act (NICCA). He dedicated his award to his mother, who died from cancer in 2014.

“No Filipino family deserves to lose their loved one, give up their savings, their house, their livelihood, and end up buried in debts all at the same time just because cancer came knocking at their doors. Ngayon, makakasama n’yo na ang gobyerno sa laban ng cancer. Hindi kayo nag-iisa. Bawat Pilipino magtutulungan, pribado man o gobyerno,” he stressed.

The law on cancer prevention will create cancer centers throughout the country, to aid in government efforts in extending financial and other forms of assistance to cash-strapped cancer patients.

With the theme, “Celebrating Excellence. Inspiring Filipinos,” the TOYM awards seek to give national recognition to men and women aged 18-40 whose selfless dedication to their profession or vocation has resulted in significant contributions to the welfare of Filipinos and the country, as well as to the advancement of their respective fields of endeavor.