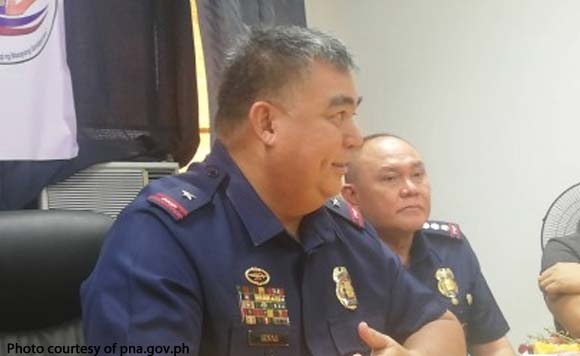 0 461
Share
Want more POLITIKO News? Get the latest newsfeed here. We publish dozens and dozens of politics-only news stories every hour. Click here to get to know more about your politiko - from trivial to crucial. it's our commitment to tell their stories. We follow your favorite POLITIKO like they are rockstars. If you are the politiko, always remember, your side is always our story. Read more. Find out more. Get the latest news here before it spreads on social media. Follow and bookmark this link. https://goo.gl/SvY8Kr

MANILA — The National Capital Region Police (NCRPO) said on Friday it will be on full alert status for the forthcoming anniversary of the New People’s Army (NPA), the armed wing of the Communist Party of the Philippines (CPP), on December 26.

NCRPO acting chief, Brig. Gen. Debold Sinas, said they will beef up internal security and intelligence operations against the leftist group to ensure peace and order during the Christmas holidays.

He also directed cops on the ground to continue securing all vital installations, economic key points as well as places of convergence and ensure a high state of operational readiness to deter CPP and other threat group plans and activities.

Asked if the NCRPO has monitored any threat, Sinas said the police only knew that some protest rallies and demonstrations will take place on that day.

“As usual naka-red alert kami diyan (We are on red alert). In fact, sa ngayon pa lang nakahanda na kami (this early, we are ready) for the International Human Rights Day and sa (on) December, 26 mag-prepare din kami (We will prepare) for any eventualities. We have contingencies in place,” Sinas told reporters in a press conference on Friday at the Quezon City Police District (QCPD) Station 10.

A full alert means the highest level of readiness in all police offices and units in the metropolis to intensify during the Yuletide season this year.

The Metro Manila top cop assured the public that they will provide peace and security everywhere they go during the Yuletide season.

Sinas also vowed to strengthen its security on the government officials are targeted by the communist front groups for leading President Rodrigo Duterte’s counterinsurgency program.

Parlade, also the Armed Forces of the Philippines (AFP) Deputy Chief-of-Staff for Civil-Military Operations, said that aside from him and Interior and Local Government Secretary Eduardo Año, included on the ‘hit list’ of the Communist Party of the Philippines (CPP) are National Security Adviser Hermogenes Esperon Jr., and National Commission on Indigenous Peoples chairman Allen Capuyan.

He said also included on the list as well are five former communist leaders who are helping the government’s anti-insurgency campaign.

Año, a retired chief-of-staff of the Armed Forces of the Philippines, has shrugged off the threat from communist rebels, saying he will not be intimidated by the CPP-NPA’s evil ploy.

The CPP-NPA is listed as a terrorist organization by the United States, European Union, the United Kingdom, Australia, Canada, New Zealand, and the Philippines. (PNA)