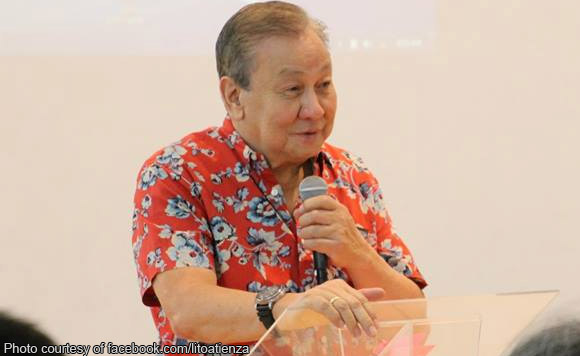 0 2,076
Share
Want more POLITIKO News? Get the latest newsfeed here. We publish dozens and dozens of politics-only news stories every hour. Click here to get to know more about your politiko - from trivial to crucial. it's our commitment to tell their stories. We follow your favorite POLITIKO like they are rockstars. If you are the politiko, always remember, your side is always our story. Read more. Find out more. Get the latest news here before it spreads on social media. Follow and bookmark this link. https://goo.gl/SvY8Kr

“We salute President Duterte with both hands and hail his strong statement castigating these two water concessionaires,” the former Manila mayor and environment secretary said.

“Again, he has proven that he has the political will to stand up to these oligarchs and free the Filipino people from their clutches. Has privatization helped improve the lives of ordinary Filipinos? The answer is a big, fat No!” Atienza said.

“It is about time that these concession agreements be reviewed and revoked if necessary, especially in the light of the Department of Justice’s disclosure that several provisions in the agreements were found to be onerous and disadvantageous to the government and to the public,” he said.

“Where have you seen a business contract where the concessionaires cannot lose and always end up making hundreds of billions of pesos at the expense of the people? Any business contract can make money for the principal or you can lose money at the same time,” he added.

“These water companies should be made accountable for their inadequate service,” he said.