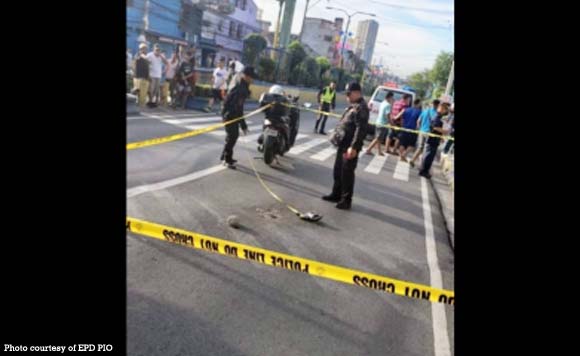 0 3,083
20
Want more POLITIKO News? Get the latest newsfeed here. We publish dozens and dozens of politics-only news stories every hour. Click here to get to know more about your politiko - from trivial to crucial. it's our commitment to tell their stories. We follow your favorite POLITIKO like they are rockstars. If you are the politiko, always remember, your side is always our story. Read more. Find out more. Get the latest news here before it spreads on social media. Follow and bookmark this link. https://goo.gl/SvY8Kr

MANILA — One person died while three others were hurt after a grenade planted under the motorcycle of a policeman fell off and exploded in Mandaluyong City, National Capital Region Police Office (NCRPO) on Sunday said.

The fatality was identified was Roger Barcelo, 37, of Barangay Barangka Drive, Mandaluyong City while Rogelio Tolentino, 32; Merlina Bag-o, 52; and Edwin Rodas, 34, were rushed to Mandaluyong City Medical Center after sustaining shrapnel wounds caused by the explosion.

S/Sgt. Aldin Saligo was on his way to the Operations Office of Mandaluyong City Police Station when he heard that something fell off from his motorcycle.

Saligo stopped about 10 meters and the grenade exploded, hitting the four persons, including Barcelo.

Prior to the incident, Saligo and other operatives of the drug enforcement unit of Mandaluyong City Police have received death threats, according to the investigators.

“The investigation is still ongoing and the elements of Mandaluyong City Police Station are scrutinizing all information to ascertain the probe on this case,” Sinas said.

Col. Remigio Sedanto, Mandaluyong police chief, said the attempt on Saligo’s life may have been due to his work as anti-illegal drug operative.

Sedanto said assistance will be extended to the victims and their families. (PNA)