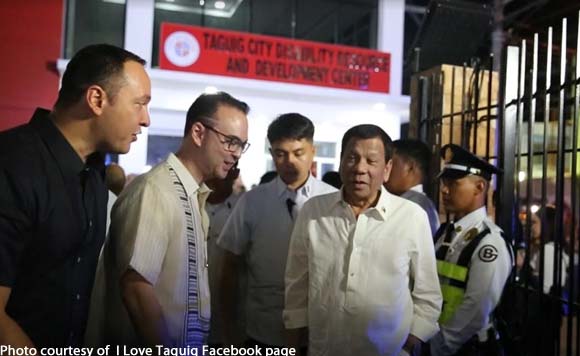 President Rodrigo Duterte has lauded the Taguig city government’s programs for senior citizens during his visit to the Taguig Center for the Elderly on Thursday.

In his speech, Duterte said he is one with Taguig in alleviating the plight of the elderly.

“As one of the countries highly urbanized cities, I give due recognition in its efforts in securing the welfare of this vulnerable sector,” the President said.

He added that the features at the Center for the Elderly and the programs of the Taguig for the seniors “will surely make them healthier and more productive as they endure old age. These also can be their source of strength and inspiration as they continue to enjoy their lives and share in our collective task of developing a nurturing society.”

President Duterte encouraged the local officials to carry on the city’s banner of “malasakit” for the elderly even as they continue to sustain Taguig’s rapidly booming economy.

He also considered Taguigenos as “very lucky” because it is blessed with resources which are used for the common good.

“Pumunta sila [investors] dito because Taguig is now a place [where it is] safe to invest and it is clean and there is less crime,” President Duterte said.