President, VP should be elected in tandem to prevent ‘kibitzer VP’ — Atienza 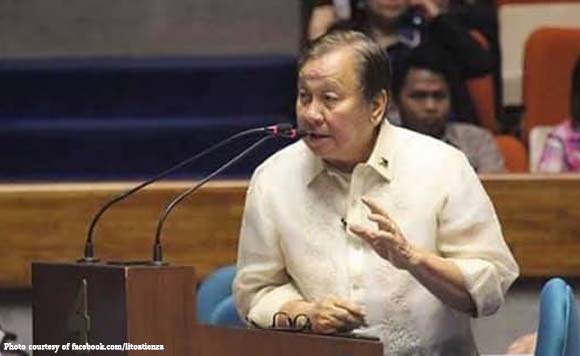 0 2,106
Share
Want more POLITIKO News? Get the latest newsfeed here. We publish dozens and dozens of politics-only news stories every hour. Click here to get to know more about your politiko - from trivial to crucial. it's our commitment to tell their stories. We follow your favorite POLITIKO like they are rockstars. If you are the politiko, always remember, your side is always our story. Read more. Find out more. Get the latest news here before it spreads on social media. Follow and bookmark this link. https://goo.gl/SvY8Kr

The country’s next president and vice president should be elected in tandem, just like in the United States, Buhay party-list Rep. Lito Atienza said on Friday.

“Our current set up wherein the president and the vice president may belong to different political parties is really problematic, counterproductive and highly impractical,” said Atienza, a former mayor of Manila.

“We should adopt the American system wherein the president and the vice president are elected together as one ticket belonging to the same party,” Atienza said.

Atienza made the statement after President Rodrigo Duterte said he still distrusts Vice President Leni Robredo, who, according to the congressman, will remain a “Cabinet outcast” despite her recent designation as cochair of the Inter-agency Committee on Anti-illegal Drugs.

Duterte mentioned that he and Robredo belonged to different political parties, and that she might compromise sensitive information obtained during Cabinet meetings owing to her penchant for “talking right and left.”

Atienza said the vice president in America is also an officer in the legislative branch who presides over the 100-member U.S. Senate.

A vice president without a Cabinet portfolio and who has no other meaningful function “tends to end up as a mere kibitzer,” according to Atienza.

If and when given the opportunity, Atienza said he would push for amendments to the 1987 Constitution so that the president and the vice president would be elected jointly, rather than separately.

“The same rule should also apply to governors and vice governors as well as mayors and vice mayors. They too should be elected in tandem and have the same party affiliation all the time,” Atienza said.