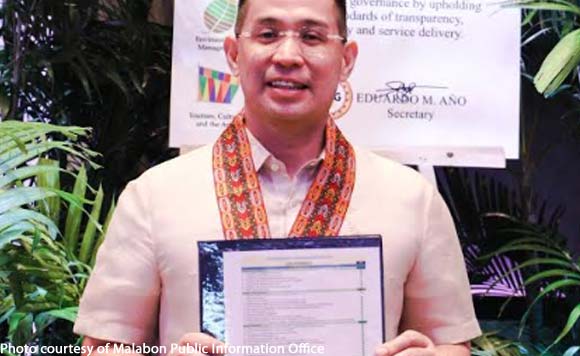 0 4,836
Share
Want more POLITIKO News? Get the latest newsfeed here. We publish dozens and dozens of politics-only news stories every hour. Click here to get to know more about your politiko - from trivial to crucial. it's our commitment to tell their stories. We follow your favorite POLITIKO like they are rockstars. If you are the politiko, always remember, your side is always our story. Read more. Find out more. Get the latest news here before it spreads on social media. Follow and bookmark this link. https://goo.gl/SvY8Kr

The city government of Malabon has scored another achievement by winning the Seal of Good Local Governance (SGLG) for the third straight year.

The SGLG, given by the Department of the Interior and Local Government (DILG), is given to local government units which showed stellar hallmarks of good governance.

Mayor Lenlen Oreta said the award is proof of his progressive and inclusive leadership.

Last month, Malabon was also recognized as the Most Improved Highly Urbanized City ng Department of Trade and Industry. It was a finalist in the 2019 Most Business-Friendly LGU.

Meanwhile, the city’s Tambobong Festival was named first runner-up by the Department of Tourism in its contest for Best Festival as a Commemorative for Historical Events.