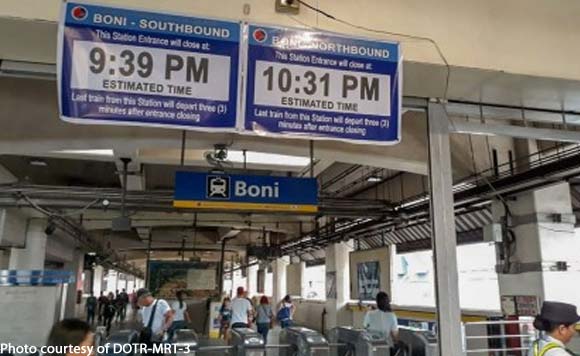 MANILA – The Metro Rail Transit Line 3 (MRT-3) on Friday put up signages indicating the closing time of each of its stations following an order from the Department of Transportation (DOTr) Secretary Arthur Tugade and suggestion from the rail line’s passengers.

In a statement posted on the MRT-3’s Facebook page, DOTr Undersecretary Timothy John Batan said the signs installed on each of the MRT-3’s stations do not only show the closing time of each station but also indicate the time of departure of the last train from each of them.

The MRT-3, meanwhile, said the order to put up the signs was given by Tugade to Batan and MRT-3 Director for Operations Michael Capati following a surprise inspection of the MRT-3 in October.

Capati said Tugade’s instruction was made following Tugade’s interaction with passengers who gave the suggestion.

On Wednesday night, rail replacement works of the MRT-3’s tracks from Ayala Station to Magallanes Station (Southbound) began as part of the DOTr’s massive rehabilitation project of the rail service awarded to maintenance and rehabilitation provider Sumitomo-MHI-TESP in November 2017.

In October, Capati said the MRT-3 will perform rail replacement works from midnight until 4 a.m. daily, during a possible full suspension of operations on some holidays, and seen to be completed in February 2021. (PNA)