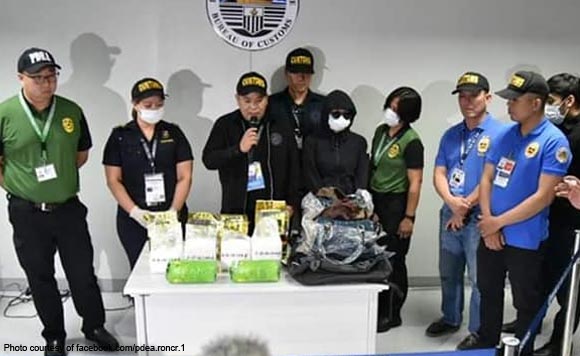 0 657
Share
Want more POLITIKO News? Get the latest newsfeed here. We publish dozens and dozens of politics-only news stories every hour. Click here to get to know more about your politiko - from trivial to crucial. it's our commitment to tell their stories. We follow your favorite POLITIKO like they are rockstars. If you are the politiko, always remember, your side is always our story. Read more. Find out more. Get the latest news here before it spreads on social media. Follow and bookmark this link. https://goo.gl/SvY8Kr

Authorities on Friday seized P40.8 million worth of shabu from an arriving Filipina passenger at the Ninoy Aquino International Airport (NAIA).

Beth Pableo, Arrival Operations Division officer in charge, identified the passenger as Marie Ruzol, who apparently claimed a friend just asked her to bring the package.

“(Shabu) was (hidden) under the lining of two handbags, three kilograms each (handbag),” Pableo said in a text message.

She added that the handbags were placed at the bottom part of a hiker’s backpack.

She added that the passenger’s backpack was subjected to x-ray scanning which yielded images of suspected dangerous drugs.

The baggage was subjected to 100 percent physical examination, where Customs personnel found white crystalline substances inside two handbags which were inside the backpack further concealed in a tea foil pack.

A field test was immediately made by the Customs Anti-Illegal Drugs Task Force (CAIDTF) and the substance tested positive for shabu.

The passenger and the illegal drugs will be turned over to the Philippine Drug Enforcement Agency (PDEA) for the conduct of inquest proceedings.

The suspect faces charges in violation of the Comprehensive Dangerous Drugs Act (Republic Act 9165) in relation to Sections 118 (Prohibited Importation), 1113 (Goods Liable for Seizure and Forfeiture) and 1401 (Unlawful Importation) of the Republic Act 10863, otherwise known as the Customs Modernization and Tariff Act (CMTA).

Last month, the BOC seized similar shipments of shabu from Siem Reap, Cambodia in Terminals 1 and 3.

She noted that the apprehension is the result of Commissioner Rey Leonardo Guerrero’s directives to all ports to be vigilant of the entry of illegal goods into the country. (with reports from Ferdinand Patinio/PNA)