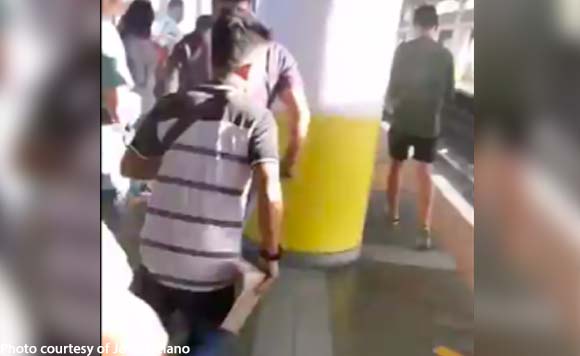 Around 530 passengers aboard a Metro Rail Transit Line 3 (MRT-3) train on Monday were offloaded after smoke pervaded the crowded train.

In a statement, the MRT-3 said at 4:08 p.m., the driver of a train heading northbound reported smoke emission and immediately stopped at Santolan Station to offload its passengers.

Netizen John Gelano (@gelanisimo) posted a video on Twitter which showed passengers running out and away from the MRT-3 train still in thick smoke.

In his post, Gelano said a loud explosion was heard before the train started filling with smoke.

He added that the passengers were unable to breathe due to the smoke until the train doors opened a minute later.

“MRT technical problem? No. Something exploded on that station. I was there. Listening to Khalid on max when I heard a loud bang. Then everybody started screaming ‘sumasabog ang tren palabasin niyo kame (the train is exploding, let us get out).’ The smoke is thick. We can’t breathe. It took a minute for us to open the door,” Gelano’s Twitter post read.

The MRT-3 apologized to its passengers and was unable to immediately say the cause of the incident but said its maintenance provider, Sumitomo-MHI-TESP (Sumitomo) will conduct a thorough investigation.

“Rest assured that [Sumitomo], will conduct a thorough investigation regarding this incident, and implement measures to prevent this from happening again,” the MRT-3 said.

At 6:06 p.m., the MRT-3 announced the resumption of regular train operations.

Last May, the Department of Transportation initiated a massive rehabilitation of the MRT-3 following years of troubles hounding the rail service.

The PHP18-billion project was awarded to Sumitomo — which includes the overhaul all 72 light rail cars of the MRT-3, the replacement of all rails along the 17-kilometer line, among other improvements — and will be completed by July 2021. (PNA)