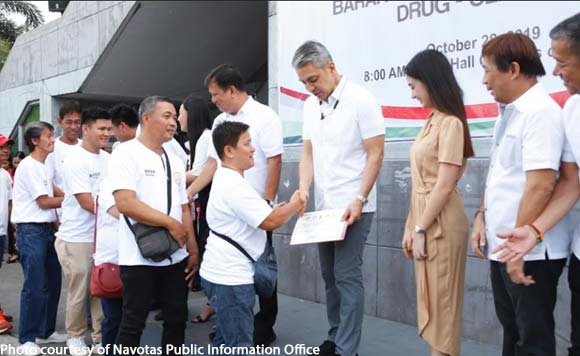 0 481
Share
Want more POLITIKO News? Get the latest newsfeed here. We publish dozens and dozens of politics-only news stories every hour. Click here to get to know more about your politiko - from trivial to crucial. it's our commitment to tell their stories. We follow your favorite POLITIKO like they are rockstars. If you are the politiko, always remember, your side is always our story. Read more. Find out more. Get the latest news here before it spreads on social media. Follow and bookmark this link. https://goo.gl/SvY8Kr

The Philippine Drug Enforcement Agency (PDEA) has recognized another barangay in Navotas as being cleared from illegal drugs.

Mayor Toby Tiangco, together with members of the city council, handed the PDEA certificate to Barangay Chairperson Marilou Gonzales.

“The fight against illegal drugs is long and arduous, yet we forge ahead knowing that every success we achieve—however small it may be—redounds to the welfare and benefit of our people,” Tiangco said.

The certificate stated that BBN has been drug-cleared as of October 22, 2019 after thorough assessment and validation on their compliance with Section 8 of Dangerous Drugs Board Regulation No. 3, series of 2017.

For a barangay to be drug-cleared, drug personalities under its unified watchlist should have been given appropriate intervention, it has a drug-free workplace, barangay officials are actively advocating for anti-drug campaign, among others.