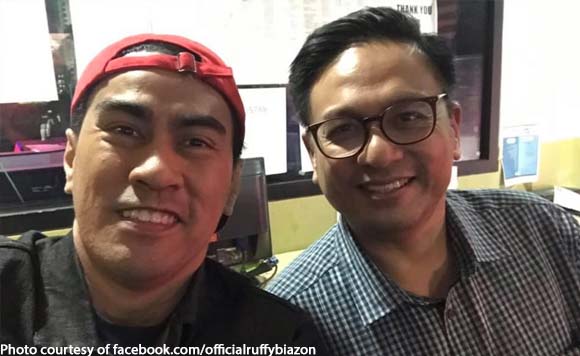 0 1,773
Share
Want more POLITIKO News? Get the latest newsfeed here. We publish dozens and dozens of politics-only news stories every hour. Click here to get to know more about your politiko - from trivial to crucial. it's our commitment to tell their stories. We follow your favorite POLITIKO like they are rockstars. If you are the politiko, always remember, your side is always our story. Read more. Find out more. Get the latest news here before it spreads on social media. Follow and bookmark this link. https://goo.gl/SvY8Kr

Comedian and actor Ramon Bautista gained a new fan in Muntinlupa City Rep. Ruffy Biazon after they met for the first time at a taping of a TV show.

In a Facebook post, Biazon said he had the chance to chat with Bautista when he guested on Ride.Ph.

“Though it was just a short encounter, I couldn’t help but add to the admiration beyond what I already have of him as an artist. Aside from being such a warm fellow, I know he has that patriotic streak by the comments he had on social issues we face today,” the lawmaker said.

Biazon said he was also charmed by Bautista’s spontaneouse sense of humor, which he said would make one want to have the actor around.

“Hats off to you, Monra!” he said, referring to a play of Bautista’s name.

Biazon and Bautista’s initial meeting was immortalized in selfies snapped by the lawmaker and shared on Facebook.