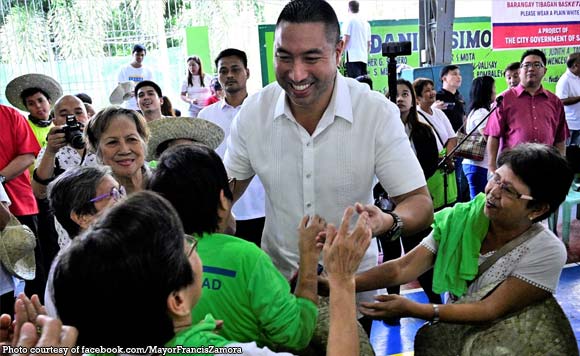 0 442
Share
Want more POLITIKO News? Get the latest newsfeed here. We publish dozens and dozens of politics-only news stories every hour. Click here to get to know more about your politiko - from trivial to crucial. it's our commitment to tell their stories. We follow your favorite POLITIKO like they are rockstars. If you are the politiko, always remember, your side is always our story. Read more. Find out more. Get the latest news here before it spreads on social media. Follow and bookmark this link. https://goo.gl/SvY8Kr

Sweeping the streets in San Juan City can make one earn more than P5,000 in 10 days.

The city government, under the leadership of Mayor San Juan City, is giving temporary work to displaced and disadvantaged residents under the Department of Labor and Employment’s Tulong Panghanapbuhay sa Ating Disadvantaged/Displaced Workers (TUPAD).

Under the program, workers can earn P5,370 by doing simple tasks such as sweeping the streets and picking up trash.

Zamora met the grateful beneficiaries of TUPAD Friday at the city hall. During their meeting, he announced there will be more residents who will be given emergency employment as DOLE gave the city government a larger budget for the program.