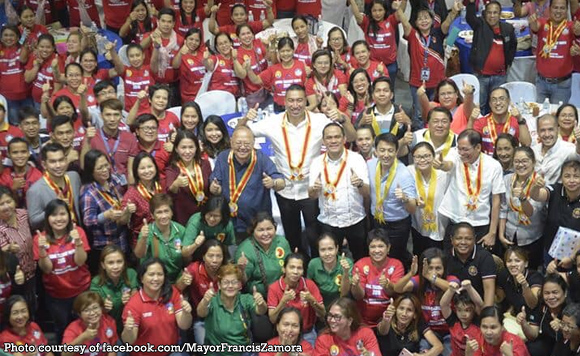 0 1,322
Share
Want more POLITIKO News? Get the latest newsfeed here. We publish dozens and dozens of politics-only news stories every hour. Click here to get to know more about your politiko - from trivial to crucial. it's our commitment to tell their stories. We follow your favorite POLITIKO like they are rockstars. If you are the politiko, always remember, your side is always our story. Read more. Find out more. Get the latest news here before it spreads on social media. Follow and bookmark this link. https://goo.gl/SvY8Kr

Hundreds of teachers in San Juan City felt like queens and kings for a day as Mayor Francis Zamora and his father, Rep. Ronnie Zamora, hosted a party for them to celebrate World Teacher’s Day.

The Zamoras gathered the teachers at a gymnasium to take part in a raffle, where several prizes were given away.

Th most coveted prize were the laptops, of which 375 were given to lucky teachers.

Those who didn’t win had a chance to bag other prizes, which included sacks of rice and small appliances.

In a Facebook post, Francis said he and his father wanted the teachers to have a fun time as payback for their sacrifices.