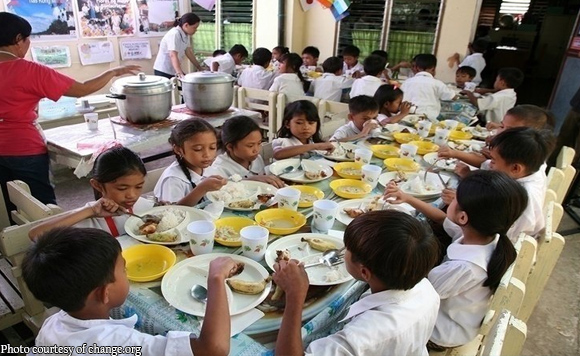 The Department of Education’s (DepEd) School-Based Feeding Program (SBFP) is getting a budget of P5.97 billion in 2020 – P1 billion or 20 percent higher than this year’s P4.97 billion, Anakalusugan party-list Rep. Michael Defensor said on Sunday.

“We are all for the bigger allocation, so that the program can target and cover a greater number of underfed school children,” he said.

Under the SBFP, Defensor said undernourished children from kindergarten to Grade 6 are given deworming tablets and fed at least one fortified meal plus doses of micronutrients in the form of pills, capsules or syrups, for at least 120 days in a school year.

“There’s no question the program has helped to improve the nutritional and overall health condition of children, apart from encouraging more of them to stay in school,” Defensor said.

The SBFP targets mostly “wasted and severely wasted” school children, or those deemed too skinny for their age.

“Right now, many school children from poverty-stricken families, even here in Metro Manila, continue to suffer from short-term hunger,” Defensor pointed out.

Short-term hunger is “a condition experienced by children who do not eat breakfast and walk long distances to reach school,” Defensor said.

In its second-quarter survey conducted in late June 2019, the Social Weather Stations found that an estimated 2.5 million Filipino families experienced either “moderate” or “severe” involuntary hunger at least once in the past three months.

“Our sense is, the DepEd is getting better in executing the SBFP, especially after the adoption a new set of guidelines two years ago,” Defensor said.