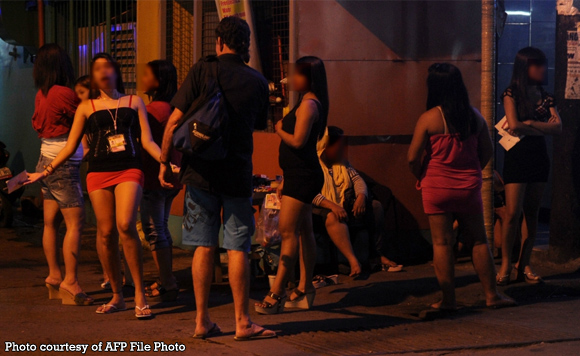 0 1,077
Share
Want more POLITIKO News? Get the latest newsfeed here. We publish dozens and dozens of politics-only news stories every hour. Click here to get to know more about your politiko - from trivial to crucial. it's our commitment to tell their stories. We follow your favorite POLITIKO like they are rockstars. If you are the politiko, always remember, your side is always our story. Read more. Find out more. Get the latest news here before it spreads on social media. Follow and bookmark this link. https://goo.gl/SvY8Kr

Police found dozens of Chinese prostitutes in a raid on a Manila brothel, authorities said Thursday, the latest in a string of operations targeting nationals from China.

Tourists and workers have poured in from China in recent years, which has been met with unease and criticism from some in the Philippines suspicious of their superpower neighbor.

In the newest case, agents swooped on an address in the financial district and found 91 Chinese women being “trafficked/smuggled to work as prostitutes… exclusively for Chinese nationals,” the National Bureau of Investigation said.

Manila has seen the arrival of tens of thousands of mainlanders working in the country’s online casino boom, which targets Chinese gamblers.

However, critics of the influx have noted the Philippines has allowed in a rush of people via an immigration process that is vulnerable to official corruption and inconsistency.

In mid-September, Philippine immigration agents, backed by troops, arrested 324 Chinese for alleged cyber crimes on the island of Palawan.

A week prior, Philippines police arrested 277 Chinese nationals in a raid on a gang wanted over a vast investment fraud that cost victims in China millions of dollars.

The spike in Chinese arrivals has come since President Rodrigo Duterte came to power in mid-2016 and set aside a territorial dispute over the South China Sea that had long soured relations.

Duterte has pursued Chinese investment and trade, but critics say he has weakened national sovereignty while getting little in return.