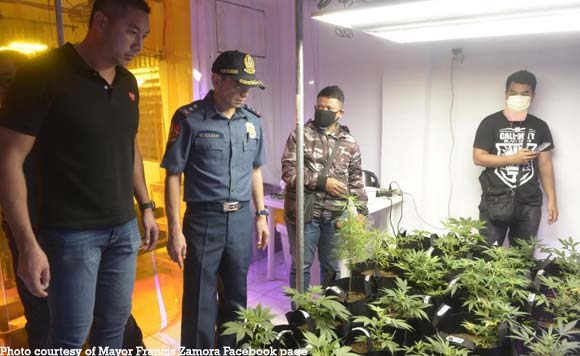 0 523
Share
Want more POLITIKO News? Get the latest newsfeed here. We publish dozens and dozens of politics-only news stories every hour. Click here to get to know more about your politiko - from trivial to crucial. it's our commitment to tell their stories. We follow your favorite POLITIKO like they are rockstars. If you are the politiko, always remember, your side is always our story. Read more. Find out more. Get the latest news here before it spreads on social media. Follow and bookmark this link. https://goo.gl/SvY8Kr

San Juan City Mayor Francis Zamora joined operatives of the Philippine National Police in raiding an indoor marijuana plantation located at the fourth floor of a building in A. Rita St., Barangay Batis on September 19.

Zamora and the police discovered a number of air-conditioned rooms that serve as marijuana nurseries and laboratory. They were filled with marijuana plants of varying sizes and packed marijuana leaves ready for distribution.

Prior to the raid, Zamora and the newly installed San Juan City Chief of Police, Col. Jaime Santos, have been working on the information about the existence of an indoor marijuana plantation and laboratory in Brgy. Batis.

Further investigation is being conducted in preparation for the filing of appropriate charges against the perpetrators in violation of Republic Act 9165, the Comprehensive Dangerous Drugs Act of 2002.