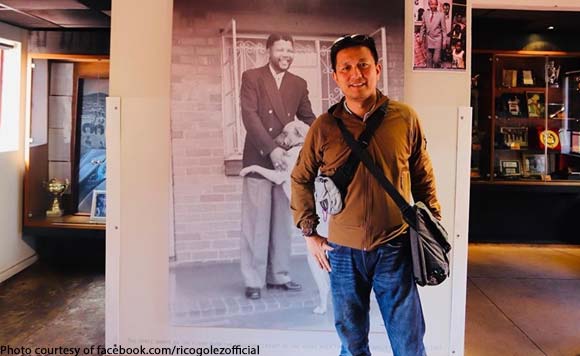 0 380
Share
Want more POLITIKO News? Get the latest newsfeed here. We publish dozens and dozens of politics-only news stories every hour. Click here to get to know more about your politiko - from trivial to crucial. it's our commitment to tell their stories. We follow your favorite POLITIKO like they are rockstars. If you are the politiko, always remember, your side is always our story. Read more. Find out more. Get the latest news here before it spreads on social media. Follow and bookmark this link. https://goo.gl/SvY8Kr

Parañaque City Vice Mayor Rico Golez had the experience of a lifetime when he visited the home of the late South African President Nelson Mandela in Soweto, South Africa.

Golez shared a photo of him beside Mandela’s portrait in the house on Facebook.

The vice mayor said he was “truly honored and humbled” to see the house of Mandela, who was also a Nobel Peace Prize winner.

“The man was a true icon of democracy, social justice and the 20th century…. he had humble beginnings,” he said.

Golez said he was inspired by the visit to Mandela’s house because he got to know more about the late democracy icon and how he changed South Africa.

South Africa and the world is in a better place because of him,” he said.