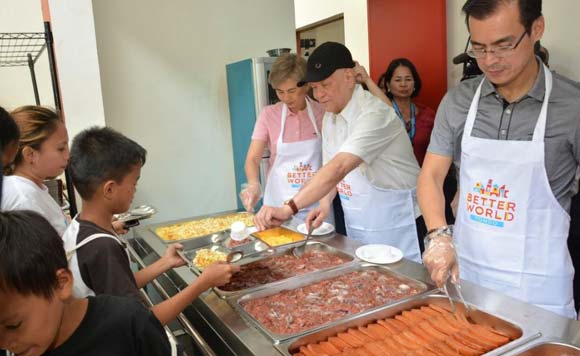 0 447
Share
Want more POLITIKO News? Get the latest newsfeed here. We publish dozens and dozens of politics-only news stories every hour. Click here to get to know more about your politiko - from trivial to crucial. it's our commitment to tell their stories. We follow your favorite POLITIKO like they are rockstars. If you are the politiko, always remember, your side is always our story. Read more. Find out more. Get the latest news here before it spreads on social media. Follow and bookmark this link. https://goo.gl/SvY8Kr

Two personalities who trace their roots to Manila visited Tondo Wednesday for the launch of a center that will keep children’s bellies and hearts full.

The two “lodis”— one in politics and the other in business— kicked off the SMC Community Center’s operations by donning aprons and serving San Miguel’s tasty food products to kids from Tondo.

Ang said the establishment of the SMC Community Center is his way of giving back to the city where he grew up.

The center is expected to provide at least 1 million meals yearly over the next decade.