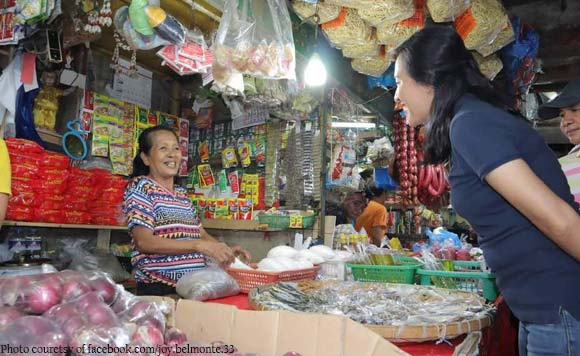 0 441
Share
Want more POLITIKO News? Get the latest newsfeed here. We publish dozens and dozens of politics-only news stories every hour. Click here to get to know more about your politiko - from trivial to crucial. it's our commitment to tell their stories. We follow your favorite POLITIKO like they are rockstars. If you are the politiko, always remember, your side is always our story. Read more. Find out more. Get the latest news here before it spreads on social media. Follow and bookmark this link. https://goo.gl/SvY8Kr

Quezon City Mayor Joy Belmonte has allowed vendors at an illegal public market under Luzon flyover to continue their operations while the local government looks for a permanent relocation site.

In a Facebook post Wednesday, Belmonte said she has written the Department of Public Works and Highways to inform its officials that the city government has taken over the public market.

The mayor recently discovered that the public market under Luzon flyover was operating without proper permits despite collecting P80 to P150 daily from each vendor.

“The owners of the company were invited to City Hall through their administrator to show me their paperwork. They never came,” Belmonte said.

With the local government in charge of the public market, the mayor said there are now regular collection of garbage by Task Force Solid Waste and inspection by the City Health Officer.

Vendors are asked to pay P10 daily to their leaders to maintain cleanliness.

“The City Legal office is currently investigating the issue and is preparing a case against the private company,” Belmonte said.