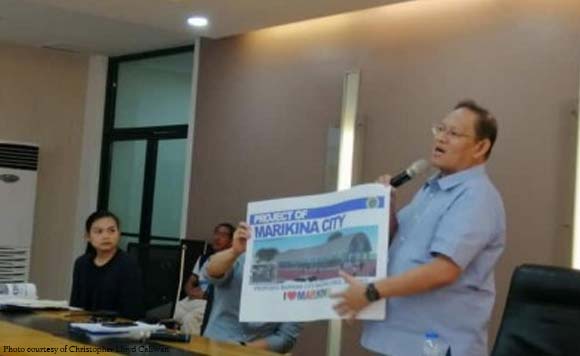 0 507
Share
Want more POLITIKO News? Get the latest newsfeed here. We publish dozens and dozens of politics-only news stories every hour. Click here to get to know more about your politiko - from trivial to crucial. it's our commitment to tell their stories. We follow your favorite POLITIKO like they are rockstars. If you are the politiko, always remember, your side is always our story. Read more. Find out more. Get the latest news here before it spreads on social media. Follow and bookmark this link. https://goo.gl/SvY8Kr

A new public market zone will keep the roads of Marikina City free from obstruction, according to Marikina City Mayor Marcelino “Marcy” Teodoro.

Teodoro said the P11-million Marikina City Bagong Sibol Market, located in Barangay Nangka of the city’s District 1, was as big as a basketball court and could house around 100 vendors with minimal rental fee.

“We develop places like this so that vendors can have a decent place where they can sell their products. We help them, at the same time, they help our local economy,” Teodoro said in a recent media interview.

He said a three-strike policy has been helping Marikina City in maintaining its tag as one of the cleanest cities in Metro Manila with people enjoying obstruction-free sidewalks.

Teodoro said the city has fully complied with the 60-day deadline imposed by the Department of the Interior and Local Government (DILG) to clear roads and sidewalks of obstructions in Metro Manila.

“Based on the comprehensive manual report, there are ‘non-applicable’ remarks on us. It’s because we have cleared many sidewalks immediately,” Teodoro said.