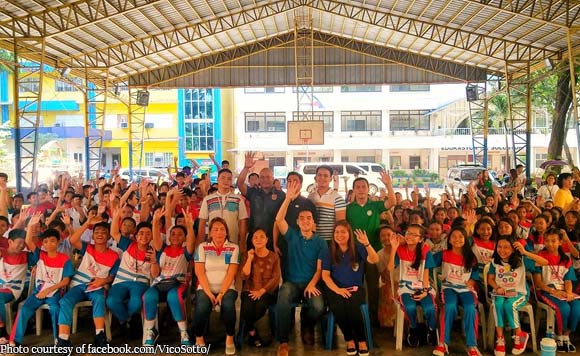 0 1,088
Share
Want more POLITIKO News? Get the latest newsfeed here. We publish dozens and dozens of politics-only news stories every hour. Click here to get to know more about your politiko - from trivial to crucial. it's our commitment to tell their stories. We follow your favorite POLITIKO like they are rockstars. If you are the politiko, always remember, your side is always our story. Read more. Find out more. Get the latest news here before it spreads on social media. Follow and bookmark this link. https://goo.gl/SvY8Kr

Pasig City Mayor Vico Sotto wants students to know the evils of drug use while they are young.

Sotto led on Friday the kick off of the city government’s anti-drugs campus tour in San Joaquin Elementary School.

A photo shared by the mayor on his Facebook page showed him posing with students and local officials in the campaign against illegal drugs.

Sotto explained that the fight against illegal drugs involves diminishing both the supply and demand.

Sotto said the campus tour will involve teaching students the “eight ways to say no to drugs.”

The city government has partnered with the Philippine National Police, Dangerous Drugs Board and Philippine Drug Enforcement Agency for the campus tour.