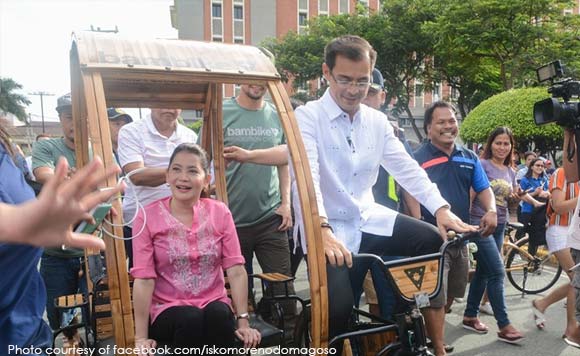 0 2,841
Share
Want more POLITIKO News? Get the latest newsfeed here. We publish dozens and dozens of politics-only news stories every hour. Click here to get to know more about your politiko - from trivial to crucial. it's our commitment to tell their stories. We follow your favorite POLITIKO like they are rockstars. If you are the politiko, always remember, your side is always our story. Read more. Find out more. Get the latest news here before it spreads on social media. Follow and bookmark this link. https://goo.gl/SvY8Kr

Moreno gamely drove a bamboo pedicab with Puyat as the passenger as they went around Intramuros.

Puyat thanked the mayor for his initiative in preserving heritage and tourism sites in Manila.

She assured full support for the redevelopment of the tourism industry in the capital city from the DOT National Capital Region and DOT’s attached agencies, namely: Intramuros Administration (IA), Tourism Infrastructure and Enterprise Zone Authority (TIEZA), and the National Parks Development Committee (NPDC).

“Tourism is a major driver for economic development in the country. Two of the attached agencies of the DOT are located in Manila – IA and NPDC. IA’s current thrusts are focused on the urban regeneration of the district through conservation, heritage and tourism. For the past two years, considerable developments have been made,” Puyat said.

The Tourism chief said she expects Manila to be an active parner in promoting tourism in the country.

“Being the capital city, we believe that Manila can be a template for sustainable tourism development in an urban setting. This can be done through Mayor Isko’s efforts of reclaiming public spaces, parks, resolving traffic, deployment of police, and provision of basic services. Going back to the basics to encourage visitors not to skip Manila in their itinerary,” Puyat said.