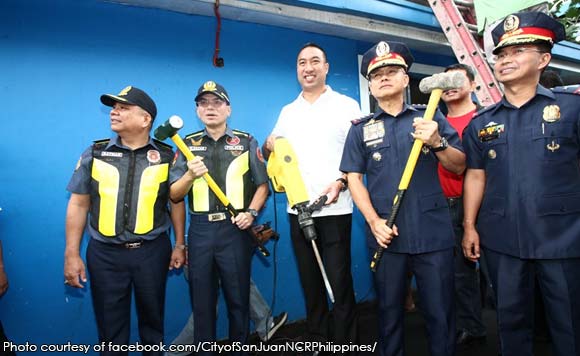 0 751
Share
Want more POLITIKO News? Get the latest newsfeed here. We publish dozens and dozens of politics-only news stories every hour. Click here to get to know more about your politiko - from trivial to crucial. it's our commitment to tell their stories. We follow your favorite POLITIKO like they are rockstars. If you are the politiko, always remember, your side is always our story. Read more. Find out more. Get the latest news here before it spreads on social media. Follow and bookmark this link. https://goo.gl/SvY8Kr

A community precinct of the San Juan City police was demolished Tuesday for being a road obstruction.

A tanod outpost and the barangay disaster management council’s office, which were beside the police station, were also torn down.

Eleazar said they decided to prioritize the demolition of the police station since cops would take the lead in road clearing operations.

The Department of Interior and Local Government has given Metro Manila mayors 60 days to clear road and streets of obstructions.

“By demolishing this Police Community Precinct, our personnel will have the moral ascendancy to demolish other structures that were also erected in public spaces,” Eleazar said.