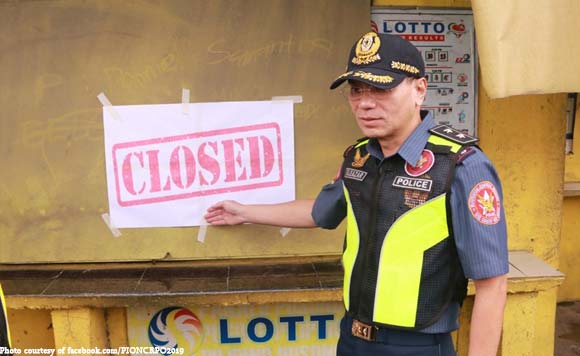 0 721
Share
Want more POLITIKO News? Get the latest newsfeed here. We publish dozens and dozens of politics-only news stories every hour. Click here to get to know more about your politiko - from trivial to crucial. it's our commitment to tell their stories. We follow your favorite POLITIKO like they are rockstars. If you are the politiko, always remember, your side is always our story. Read more. Find out more. Get the latest news here before it spreads on social media. Follow and bookmark this link. https://goo.gl/SvY8Kr

The NCRPO, led by P/Maj. Gen. Guillermo Eleazar, has closed down all outlets of lotto, lotto with Keno, small town lottery (STL), Peryahan ng Bayan and KENO in Metro Manila as of 11 p.m. Saturday.

Based on data from NCRPO, there was a total of 2,211 PCSO outlets in Metro Manila.

Policemen spent the entire Saturday going around their respective areas of duty to close down PCSO outlets in accordance with Duterte’s directive.

The President ordered a halt in PCSO’s gaming operations due to “massive corruption” in a taped message uploaded on YouTube.

Duterte said he can no longer tolerate the corruption in PCSO because some people were getting money that was supposed to go to the government.