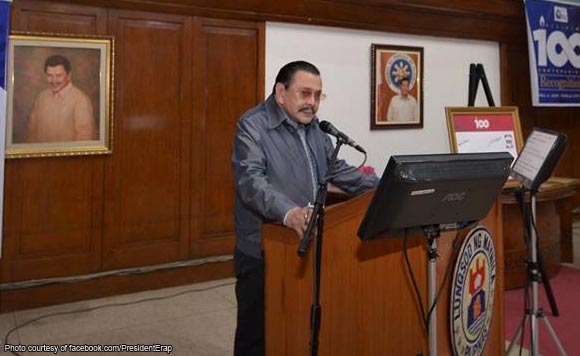 0 466
Share
Want more POLITIKO News? Get the latest newsfeed here. We publish dozens and dozens of politics-only news stories every hour. Click here to get to know more about your politiko - from trivial to crucial. it's our commitment to tell their stories. We follow your favorite POLITIKO like they are rockstars. If you are the politiko, always remember, your side is always our story. Read more. Find out more. Get the latest news here before it spreads on social media. Follow and bookmark this link. https://goo.gl/SvY8Kr

Former President and ex-Manila mayor Joseph Estrada has slammed critics who accuse his family of being greedy for wanting too many positions at both local and national levels in the 2019 elections.

In an interview with ABS-CBN News, Estrada said there was nothing wrong with his relatives running for several posts.

“Bakit greedy? Siraulo nila. Bakit di nila gawin? It’s the will of the people,” he said.

Estrada lost control of his Manila bailiwick to Mayor Isko Moreno and his daughter, Jerika, was also defeated in her candidacy for city councilor.

The former mayor said his family was not a political dynasty because his relatives won in elections.

The people’s will is the voice of God. Anong dynasty? Hindi ba kayo nagbabasa ng dictionary?” he said.