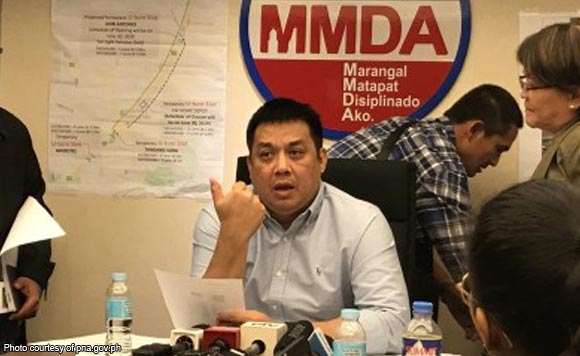 0 916
Share
Want more POLITIKO News? Get the latest newsfeed here. We publish dozens and dozens of politics-only news stories every hour. Click here to get to know more about your politiko - from trivial to crucial. it's our commitment to tell their stories. We follow your favorite POLITIKO like they are rockstars. If you are the politiko, always remember, your side is always our story. Read more. Find out more. Get the latest news here before it spreads on social media. Follow and bookmark this link. https://goo.gl/SvY8Kr

An official of the Metropolitan Manila Development Authority (MMDA) announced on Thursday the relocation of U-turn slots along Commonwealth Avenue in Quezon City and C5 Road in Parañaque City to give way to the construction of the Metro Rail Transit 7 (MRT-7) and the C5 Southlink Expressway project.

In a press briefing at the MMDA main office in Makati City, MMDA general manager Jose Arturo “Jojo” Garcia Jr. said the U-turn slot in front of a CW Home Depot on Commonwealth Avenue will be closed and replaced with a new U-turn slot on Tandang Sora to allow the construction of an MRT-7 guideway.

The new traffic scheme will take effect from midnight on Sunday (June 30).

Garcia also announced the closing of a U-turn slot on C5 Road to make way for the construction of a flyover connecting the new C5 Southlink Expressway to the old C5 Road.

The closed U-turn slot will be temporarily replaced on Saturday by a new one adjacent to the Heritage Park in Taguig City.

Garcia said once the new flyover opens to traffic, an estimated 7,000 vehicles from the C5 Road in Taguig going south will have their trips shortened by 20 minutes as they no longer have to traverse the Sales Interchange beside the Villamor Air Base Golf Course and instead take a direct route to the C5 Southlink Expressway.

Parañaque may soon require e-trike drivers to get a license