Nagtrabaho talaga! Here are all the bills Winnie Castelo pushed in Congress 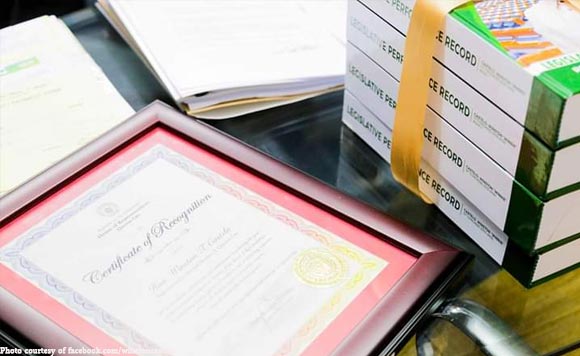 0 8,031
Share
Want more POLITIKO News? Get the latest newsfeed here. We publish dozens and dozens of politics-only news stories every hour. Click here to get to know more about your politiko - from trivial to crucial. it's our commitment to tell their stories. We follow your favorite POLITIKO like they are rockstars. If you are the politiko, always remember, your side is always our story. Read more. Find out more. Get the latest news here before it spreads on social media. Follow and bookmark this link. https://goo.gl/SvY8Kr

These volumes were products of his nine years as a solon.

Quezon City Congressman Winston Castelo is on his way out of the House of Representatives, but that doesn’t mean that his legacy will be forgotten.

Thanks to the House of Representatives Bills and Index Division, he’s got something to show whenever people ask about his time as a lawmaker.

The unit compiled Castelo’s entire Legislative Performance Record for the last nine years, which ended up as several volumes of paper.

“I dedicate this recognition to people who made all this possible- residents of District 2 together with the constituents in District 5 and 6 who used to part of the original District 2 that elected me in 2010,” he said. “Thank you for the honor and opportunity in serving you all.”

Continue Reading
congressmanHouse of RepresentativeslegacyQuezon City
0 8,031
Share
Politiko would love to hear your views on this...
Trending News
More Stories