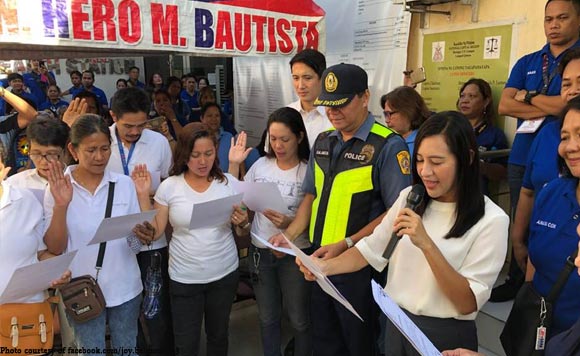 0 2,013
102
Want more POLITIKO News? Get the latest newsfeed here. We publish dozens and dozens of politics-only news stories every hour. Click here to get to know more about your politiko - from trivial to crucial. it's our commitment to tell their stories. We follow your favorite POLITIKO like they are rockstars. If you are the politiko, always remember, your side is always our story. Read more. Find out more. Get the latest news here before it spreads on social media. Follow and bookmark this link. https://goo.gl/SvY8Kr

The Quezon City local government is stepping up the campaign against illegal drugs by enlisting the assistance of volunteers at the barangay level.

She said BADAC volunteers are expected help in reporting drug incidents and cases, facilitating an information campaign through their families and communities, and implementing programs that prevent drug addiction.

According to a 2004 memorandum from the Department of Interior and Local Government (DILG), barangay anti-drug councils are required to form a BADAC Auxiliary Team (BAT) to strengthen anti-drug efforts at the grassroots level and further involve all residents in reducing drug-related crimes.

The BAT must be composed of at least 25 members per 2000 residents of the barangay.