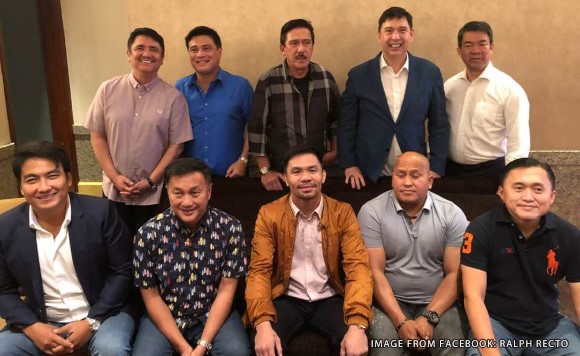 0 834
Share
Want more POLITIKO News? Get the latest newsfeed here. We publish dozens and dozens of politics-only news stories every hour. Click here to get to know more about your politiko - from trivial to crucial. it's our commitment to tell their stories. We follow your favorite POLITIKO like they are rockstars. If you are the politiko, always remember, your side is always our story. Read more. Find out more. Get the latest news here before it spreads on social media. Follow and bookmark this link. https://goo.gl/SvY8Kr

Ahead of the official proclamation of winners, some administration senatorial aspirants have celebrated their imminent victory in the midterm elections.

Pimentel also posted on Facebook other photos with his colleagues at the ruling party during the event.

Continue Reading
0 834
Share
Politiko would love to hear your views on this...
Trending News
More Stories