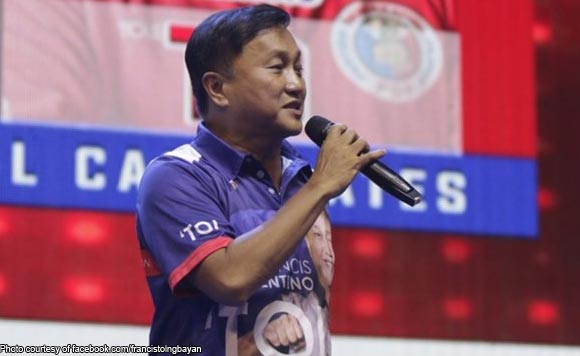 Former Presidential Adviser on Political Affairs Francis Tolentino, who is currently among the winning circle of 12 in the mid-term polls’ senatorial race,is going to push for the passage of emergency powers to solve traffic woes, particularly in Metro Manila.

Tolentino, former Metropolitan Manila Development Authority (MMDA) chairman, said he would “refile” an emergency powers measure despite the measures pending in both chambers of Congress.

Tolentino, who was among the candidates endorsed by President Rodrigo Duterte in the May 13 polls, said he would discuss his plan with the Chief Executive.

He also planned to strengthen the mandate of the MMDA, which is currently in charge of crafting and implementing a development plan to address transport decongestion, climate change, waste management, and disaster prevention, among others.

Several lawmakers have filed bills granting Duterte emergency powers to solve traffic problems after the President said in his first state of the nation address (SONA) in 2016 that traffic woes should be “legitimately addressed” if Congress could accord him emergency powers.

Duterte, however, eventually said he has given up on his plan to address the worsening traffic situation after some lawmakers claimed that emergency powers might be used for corrupt activities.

“Let’s just leave Edsa as it is. If you don’t trust me, then don’t. Congress won’t give me emergency powers for traffic. Ayaw ko na rin (I don’t want it. too),” Duterte said in a one-on-one in interview with Chief Presidential Legal Counsel Salvador Panelo in September last year.

Aside from emergency powers, Tolentino said he would push for the
creation of a Department of Disaster Management and the revival of the
mandatory Reserve Officers’ Training Corps (ROTC).

If given the chance to select a Senate committee to chair, Tolentino
said he would want to chair the panels on local government and
environment.

Data from the partial, unofficial tally places Tolentino on the ninth
spot in the senatorial race with more than 15,000 votes. (PNA)

Grow your own food: Camille Villar pushes for ‘campus farms’