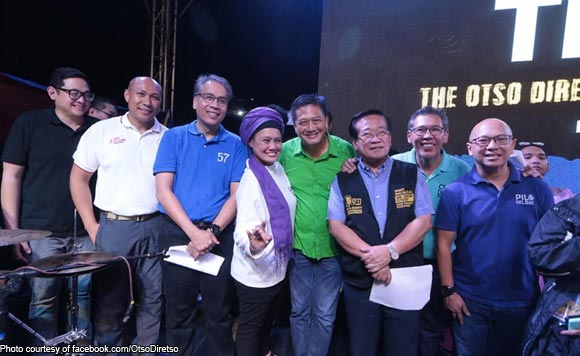 0 2,696
1,404
Want more POLITIKO News? Get the latest newsfeed here. We publish dozens and dozens of politics-only news stories every hour. Click here to get to know more about your politiko - from trivial to crucial. it's our commitment to tell their stories. We follow your favorite POLITIKO like they are rockstars. If you are the politiko, always remember, your side is always our story. Read more. Find out more. Get the latest news here before it spreads on social media. Follow and bookmark this link. https://goo.gl/SvY8Kr

The jabs of the opposition bloc Otso Diretso against President Rodrigo Duterte have only benefitted the administration’s senatorial bets after its candidates failed to make it to the top 12 senators in the mid-term elections, a political analyst said Saturday.

Based on partial, unofficial results from the Commission on Elections (Comelec) as of May 18, Bam Aquino, has the most number of votes at 14,074,404 among the eight candidates carried by the Otso Diretso but this was only good for 14th spot.

Casiple said this strategy was bound to backfire as President Rodrigo Duterte was backed by a large number of supporters and has recently garnered a record-high of 81 percent satisfaction rating from Filipinos in the first quarter of 2019.

In the partial, official tally of the votes from 146 Certificates of Canvass or 91.80 percent of registered voters as of 7:16 p.m. Friday, re-electionist Senator Cynthia Villar has maintained her lead among the senatorial bets in the May 13 mid-term polls, with 23,610,580 votes.