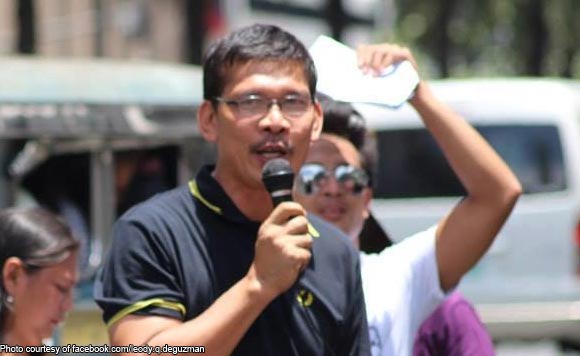 Senatorial candidate and labor group leader Leody de Guzman on Saturday asked the Commission on Elections (Comelec), sitting as the National Board of Canvassers (NBOC), to suspend the canvassing of votes for senatorial and party-list pending the investigation of allegations of widespread fraud and cheating in the recent mid-term elections.

The chairman of the Bukluran ng Manggagawang Pilipino (BMP), through his legal counsel Aaron Pedrosa, filed the nine-page manifestation and urgent motion before the poll body.

Likewise, he questioned the “undue haste” by the poll body after its spokesperson James Jimenez pronounced that they planned to proclaim winners in the senatorial and party-list elections on Sunday.

“Why is Comelec in a hurry when there are pending manifestations to investigate allegations and irregularities? Comelec should look into incidents and reports that taint the integrity of the ballot, these include the breakdown of vote counting machines, the eight-hour blackout in the transmission of electoral results, the heightened practice of vote buying, the negative campaigning and black propaganda by AFP (Armed Forces of the Philippines) and PNP (Philippine National Police) against militant party-list groups,” he said in a statement.

De Guzman noted that the Comelec’s action giving its citizens’ arm Parish Pastoral Council for Responsible Voting access to the audit logs of the transparency server, will not suffice the suspicions of supposed irregularities.

“This alone will not give the electorate satisfactory answers that would eliminate suspicions as to perceived irregularities arising from technical glitches,” the motion added.

The labor sector’s senatorial bet explained that it is the mandate of the electoral commission to conduct clean, honest and credible elections and any undue haste to proclaim candidates without threshing out all the issues raised by various groups will only give credence to politicians who benefitted from systematic fraud and disenfranchisement of the electorate.

“Ang isyu ay hindi ang aking paghahabol na maproklama. Sa simula’t simula, alam natin na magiging mahirap ang kandidatura ko hindi lang dahil hindi pa naoorganisa ang manggagawa bilang isang pampulitikang pwersa sa lipunan kundi dahil sa tindi pa ng kamandag ng political patronage ng mga trapo’t dinastiya. Ang usapin ngayon ay ang integridad ng balota at pagsikil sa kolektibong kagustuhan ng mamamayan(This is not about me being proclaimed. From the beginning, I am aware that I will have a hard time pushing for my candidacy because the labor sector has yet to be organized as a political force of society, not to mention the venomous political patronage by traditional politicians and dynasties. The point here is the integrity of the ballots and the suppression of the people’s will),” De Guzman said.

“It is truly tragic if people are denied their right to choose the nation’s leaders. Once every three years, ordinary folks are empowered by the power of choice through the right to vote. Minsanang pagkakataon na lamang ito para sa mamamayan, dinadaya pa! (This chance for the people is a rare opportunity yet it is marred with cheating)” he added.

The BMP chair also called on the electorate to maintain vigilance and
fight for the sanctity of their ballots.

He added that Comelec must heed the people’s demand for an independent and thorough investigation into massive cheating, especially after Comelec Commissioner Rowena Guanzon admitted that vote buying worsened in the recently-concluded elections.

As of Friday evening, De Guzman has garnered over 800,000 votes.

On Friday, several party-list groups have asked the Comelec to cancel and/or suspend the proceedings for the canvassing of votes for party-list representatives until the issues that have arisen during the conduct of the mid-term polls have been resolved.

“It is our considered view that while pre-proclamation contest is generally now allowed, the existing elections laws carved out certain exceptions, such as any discrepancies and manifest errors in the certificate of canvass, and on questions affecting the compositions or proceedings of the board of canvassers,” read the petition filed by party-lists Append, Partido Lakas ng Masa, Murang Kuryente, and Ang Nars.