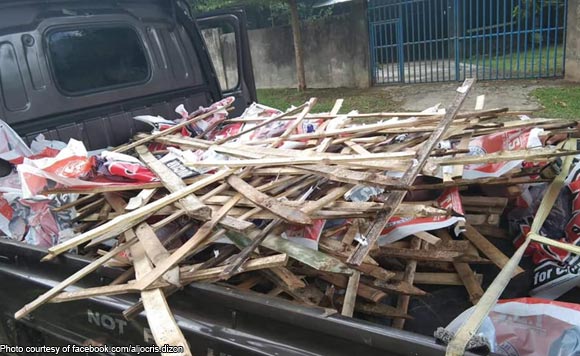 0 1,694
Share
Want more POLITIKO News? Get the latest newsfeed here. We publish dozens and dozens of politics-only news stories every hour. Click here to get to know more about your politiko - from trivial to crucial. it's our commitment to tell their stories. We follow your favorite POLITIKO like they are rockstars. If you are the politiko, always remember, your side is always our story. Read more. Find out more. Get the latest news here before it spreads on social media. Follow and bookmark this link. https://goo.gl/SvY8Kr

In a statement on Friday, the MMDA said its Metro Parkway Clearing Group (MPCG) hauled campaign trash in the metropolis from March 1 to May 16.

The collected trash reached 23.42 tons on May 14; some 14.45 tons on May 15; and 17.08 tons on May 16 from major thoroughfares and the vicinity of public schools in Metro Manila during post-election clearing operations by the MPCG.

“The campaign materials will not be thrown away at landfills but will be converted to bags, place mats, baskets, school supplies, and other useful items,” MMDA Chairman Danilo Lim said.

“Environmental groups who want to recycle the campaign materials may coordinate with the agency,” he added.

A task force was created by the Commission on Elections (Comelec), MMDA, Department of Public Works and Highways, and the Philippine National Police for “Oplan Baklas” to remove illegal campaign materials.

More than 100 MMDA personnel participated in the taking down and removal of campaign materials in major thoroughfares and several public schools in Metro Manila.

The collection of campaign trash for this year’s elections was lower compared to the 2016 elections wherein campaign materials gathered reached 206 tons. (PNA)