Second time’s the charm? #Diokno2022 trends as netizens can’t get enough of Chel 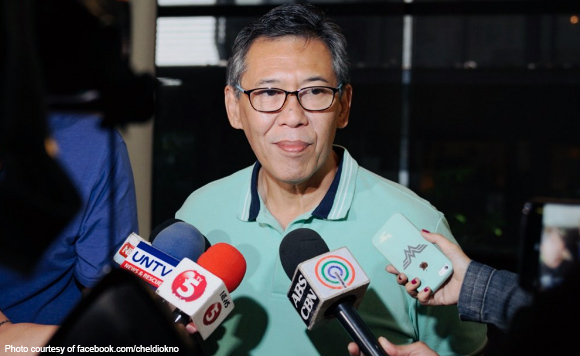 Otso Diretso senatorial candidate Chel Diokno may have lost the senatorial race, but he has earned netizens’ admiration for being the “woke lolo.”

A day after the elections, talk about a possible 2022 campaign for Diokno is already starting to gain ground on Twitter.

The hashtag #Diokno2022 trended on Twitter Philippines Tuesday, with several netizens urging him to run again.

Diokno appears to be open to the idea, telling his supporters at a gathering at “this fight will not end until we win.”

“Isipin natin kung everyday, may ma-woke tayong isa, at the end of one year, ilan na yung mawwoke natin; at the end of 2 years, doble pa,” he said.

“And at the end of three years, wala nang makakapigil sa ating ginagawa. I will promise you that I will never give up. This fight will not end until we win,” Diokno added.

And at the end of three years, wala nang makakapigil sa ating ginagawa. I will promise you that I will never give up. This fight will not end until we win. Maraming salamat!

Remember when @PiaWurtzbach, actually failed the attempts to win Bb. Pilipinas? God gave her the universe instead. What if @ChelDiokno was meant to lose the senatorial race right now, because God wants him to take over the Philippines and make the biggest change? #Diokno2022

Diokno bears all the characteristics of a winning senatorial candidate: a voice that resonates with warmth and gravitas; a stature that indicates both dignity and humility; and a passion that pervades through every word he speaks. #Diokno2022

#DIOKNO2022 will be the biggest and best youth-driven, crowd-sourced campaign the Philippines will see. Markahan tong tweet na ‘to.