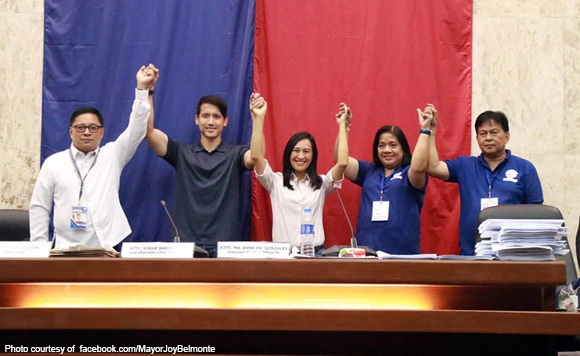 Quezon City Vice Mayor Joy Belmonte has been proclaimed mayor-elect after defeating a total of 10 candidates in the mayoralty race.

Belmonte was proclaimed Tuesday morning after the canvassing of all election results in Quezon City were completed.

The daughter of former Speaker Sonny Belmonte got a total of 469,480 votes. Her closest rival, Congressman Bingbongg Crisologo, trailed behind with 366,215 votes.

Belmonte’s running mate, Councilor Gian Sotto, was proclaimed the vice mayor-elect after garnering a total of 382,393 votes to lead the race. In second place was lawyer Jopet Sison, who got 343,473 votes.

The mayor-elect has vowed to implement sweeping reforms in Quezon City, such as improving government housing projects and using technology to improve the delivery of services to the people.